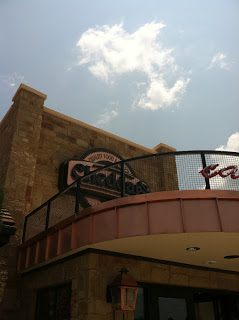 The wait is over, the Cheddar’s restaurant is officially opened. This past weekend we had the honor of dining at Cheddar’s with an awesome couple, Val & Steve Melancon. The Lord put the Melancon’s in our life when we were going through a major transition. They have been a major encouragement and a tremendous blessing to us. The Melancon’s are family to us.
When we decided that we wanted to do lunch, Cheddar’s was one of the restaurants we discussed. We wanted a place where we could enjoy a great lunch with good fellowship.  Lol, so why not Cheddar’s. There had been so much hype leading up to the opening of the restaurant. We were excited to see what our dining experience would hold. 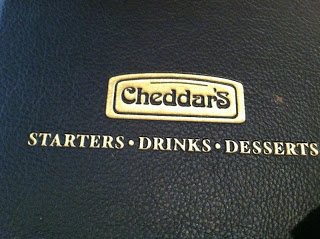 Cheddar’s is a restaurant that offers handmade, high quality food at a reasonable price. Their main goal is to offer an environment that is comfortable and a menu that consist of items that are made from and prepared as if it were home cooked. 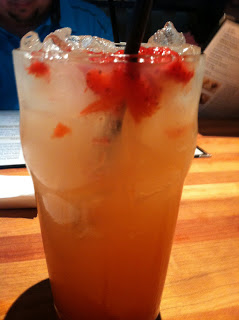 I had my usual drink of choice a strawberry lemonade. The drink was pretty good. I loved the chunks of strawberries that were in the drink. Cheddar’s also has a fruit infused tea which is freshly brewed ice tea that is available in strawberry, raspberry, mango or peach. I will definitely try the tea next time I go.

We started with the chips and salsa. The salsa was perfect. The spice was on point, a nice kick. The cilantro was potent without going overboard, very fresh salsa. The homemade chips were good as well, crispy, crunchy and not to salty.

We also had the triple threat sampler. This appetizer consisted of beef, bean and cheese nachos which were topped with jalapeno peppers. In addition, there was also the choice of either chicken tenders, mozzarella sticks or loaded potato skins. We decided on the chicken tenders and the potato sticks, but they were out of the potato skins so we settled for the mozzarella sticks. The potato skins must be superb for them to be completely out of it. The sampler also came with marinara sauce and honey mustard sauce. 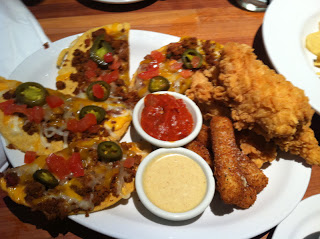 The appetizer was very good. We enjoyed it. My favorite thing was the nachos. I could have eaten just that with some salsa and sour cream. It was delicious. I am not a fan of mozzarella sticks but the others enjoyed it. It was just ok to me, but I don’t care for mozzarella sticks from any restaurant. 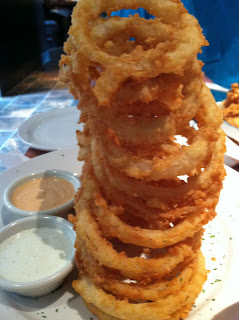 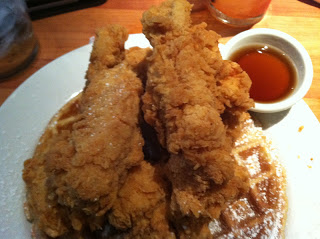 Steve & I ordered the chicken & waffles. The dish consisted of a homemade Belgian waffle, 4 chicken tenders, topped with powdered sugar and buttery hot syrup. The chicken tenders were huge! The chicken consisted of  all white meat. Nice and juicy.  In my opinion, I would have like to taste a little more spice. The waffles were your typical Belgian waffle.  As a whole the dish was pretty good. It wasn’t the best chicken and waffles I have ever eaten, but it was good enough for me to have again. 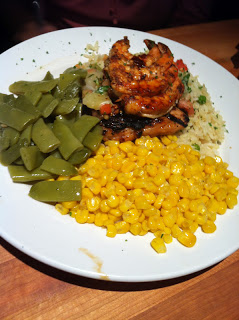 I believe Val ordered the Key West Chicken and Shrimp. This dish looked amazing.  The marinated chicken breast was topped with grilled shrimp. Served on a bed of seasoned rice, southern green beans and buttered off the Cobb corn. This dish not only looked amazing, it was good for you too. She said that the dish was superb. I will definitely give this a try on one of my healthy kick days. 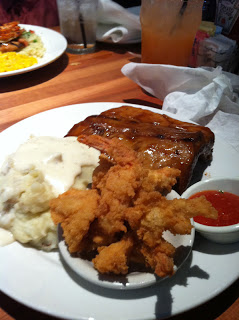 Brian ordered the Ribs & Shrimp with mashed potatoes and gravy & broccoli and cheese casserole. He had a half rack of hickory smoked pork ribs. The shrimp were hand battered and fried a nice golden brown. The potatoes were homemade topped with white gravy. He also had the broccoli cheese casserole which consisted of broccoli, cheese and rice. 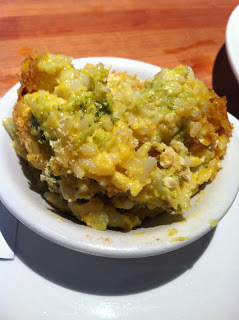 His opinion of his entree was that as a whole /it was ok. He said the pork ribs were average, he preferred the Chili’s ribs better. He loved the mashed potatoes and gravy. The broccoli cheese rice was decent, not bad.
Overall our experience was really good at Cheddar’s. There was a little wait, but we didn’t mind it. So be prepared to wait at least 30 minutes if you go on the weekends. I will say that, it will probably settle down once the newness wears off. Everyone wants to try Cheddar’s, so there may be a wait for at least a month or so. During the week may be better for those who don’t like to wait.
The food was worth the wait. No, we didn’t love everything we tried, there were many things we did like. There is a very extensive menu, so there is something for everyone in the family. Anything from sandwiches, salads, soups, even some of the classics that mom makes at home!
The atmosphere was nice, calm & relaxing. There is a really nice aquarium and a really cool fan, that’s like no other.  The decor is very nice and clean looking.
The waiter was nice but she needs more training. It felt like she was rushing us through our meal. We were still eating and she was offering us boxes. Which was a bit rude, but since they are just opening, we will let her slide this time.
I’m looking forward to going back to try the Monte Cristo. I am not sure how many of you remember the Monte Cristo, but Bennigan’s Monte Cristo was delicious and I was so disappointed when they closed, because no one else has the sandwich. So excited,  Good stuff. Kmsl..
Cheddar’s is located at 5755 Johnston Street, 534-0712. The hours of operation are Mon-Thurs 11am-10:30pm, Fri. & Sat 11am-12am & Sundays 11am-10:30pm.