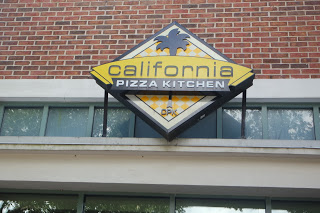 California Pizza Kitchen had a very limited appetizer menu. None of the appetizers appealed to us, so we didn’t order any. We decided to share a few pizza’s. The White Pizza sounded awesome. When the pizza arrived, it looked scrumptious. The toppings on the pizza was Mozzarella, Ricotta, Parmesan and Pecorino Romano Cheese, Sauteed Spinach and Roasted Garlic. The pizza did not have the traditional red sauce that most pizza’s include. In my opinion, it was just ok to me. I wasn’t blown away. The Ricotta cheese was too clumpy, I think the pizza should have been baked a little longer.  We added the Nueske’s Applewood Smoked Bacon to the pizza. The bacon was not as powerful as most bacon. It didn’t make much of a difference. Maybe if the bacon was spread around more it would have been different. 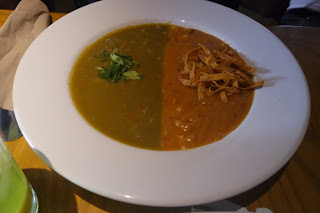 My mom ordered the Two in a Bowl Soup. Great idea if I say myself. The Sedona Tortilla Soup is on the left and the Dakota Smashed Pea and Barley Soup on the right. The Tortilla soup had vine-ripened tomatoes, tomatillos (Mexican Husk Tomato) and corn with mild green chilles and Southwestern Spices. Mom loved the soup, but unfortunately mid way into her soup, she found a piece of hair in it. The waitress did offer her another bowl of soup or she could order something else. But my mom decided she was good. She wasn’t charged for the meal. Hair nets should be worn in the kitchen in order to prevent something like that happening. 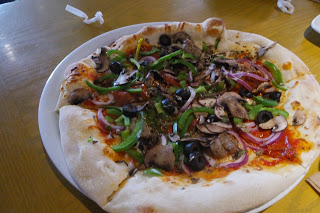 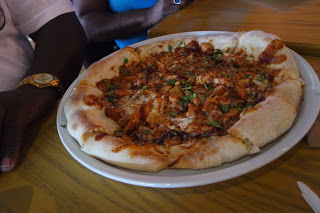 My Aunt and Uncle ordered the Original BBQ Chicken Pizza. Let me just say, I love BBQ, but I was unsure about this combination. The pizza sauce was BBQ with smoked gouda cheese, red onions and cilantro. My Uncle said it was really good! The combinations paired perfectly the together between the tanginess of the sauce and the smokiness of the gouda cheese. So I guess it worked. I didn’t try it but they really enjoyed the pizza. 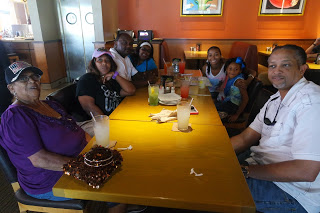 California Pizza also has other entree options like Tacos, Pastas and Salads.
Overall our experience there was good. The service was mediocre. The pizza was average, we have had better pizza but it was a good choice since we wanted a quick meal. We had fun in the restaurant regardless. Lots of good laughs that’s for sure.
California Pizza Kitchen is located at 10001 Perkins Rowe, Ste. 110, Perkins Rowe, Baton Rouge, LA 70810