Skip to content
A few Monday’s ago lil mama & I had a late lunch at Tsubaki Hibachi Grill and Sushi. The first time we ever had Tsubaki was for the Hibachi Grill a few years ago.  The Hibachi experience was amazing! We absolutely loved it.
For those who aren’t familiar with what an hibachi grill is let me explain. A hibachi grill is where all of the ingredients for your fried rice like onions, vegetables and your meat of choice is prepared on something referred to as a gas heated hot plate. The chef preparing the food on the hibachi grill normally puts on a show. Very entertaining. 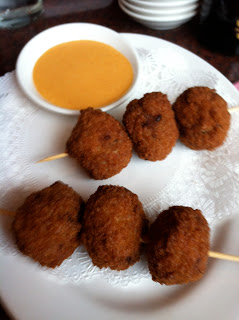 We started out with an appetizer. Normally we order edamame, but we decided on something different, I totally forgot what it was called but it is very similar to a Crawfish ball. This appetizer was scrumptious. Omg. It included crawfish, onions, celery, parsley, spices. The ingredients were combined into a ball, battered and fried.  The crawfish ball was served with spicy mayo sauce. Love, love it together.
The ball was crispy on the outside and moist on the inside. One of the best appetizers at any sushi restaurant I have ever had. A must try!!  The ingredients married very nicely together. 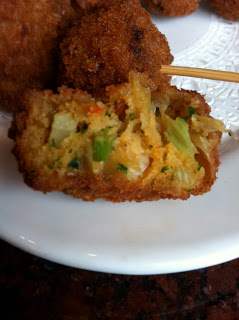 Lil mama had chicken Fried Rice. The rice consisted of chicken breast, eggs, soy sauce and seasoning. The fried rice was pretty good. The rice was a little hard in some places. Flavor wise it was decent. The food was very hot, so I know it was fresh which is a good thing. 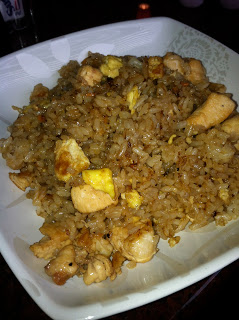 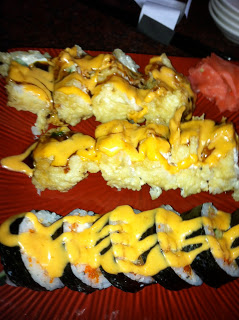 The second roll was the TNT roll. Amazing. Very similar to the other roll but the difference was the roll consisted of snowcrabs, cucumbers, cream cheese and deep fried. The roll was deep fried and also topped with spicy mayo. Out of the two rolls this was my favorite.
As far as the food was concerned I didn’t have any major complaints besides the hard rice. I do have complaints about the service. We arrived at 2:15 or so. There were not many people when we arrived. Before going in I checked the door to see if the restaurant closed at a specific time. There was no sign so we went in.
I took a few minutes to order because I was talking to lil mama and deciding what we wanted. We eventually ordered and the food didn’t take long to come out. When I was finished eating, I asked the guy for a dessert menu, he told me that the kitchen was closed. I said oh, do you close early? He said we close at 3. The people across from me didn’t know that they closed early either. But that wasn’t the issue. He told me that all of the cooks were all gone. I said, wow the cooks leave before service is done. When I said that, he said well I can make your dessert. I told him no thank you, because I felt if he wanted to serve me properly he would have offered to make dessert prior.
My complaint is that, for one a sign should be put up on the door, the menu or somewhere visible. Though I like Tsubaki, I don’t eat there all the time, so there is no way I would know the hours of operation. Two, he should have come to the table about 15 minutes before closing and ask if we meaning everyone in the restaurant needed anything else, because the restaurant would be closing. The hostess was shutting the TV’s off and the music. I personally thought it was a little rude. The other people in the restaurant also thought that it was a little unprofessional. One of the men said well I guess they are giving us a sign. This could have been handled differently.
Other than this incident, the service was decent. The food was great, but they need help with their service. I have been to Tsubaki several times but this was the worst visit to Tsubaki.
Tsubaki is located at 3564 Ambassador Caffery Parkway, 981-3111.