Skip to content
Saigon Noodles is one of our favorite restaurants. When we heard that they were opening a new restaurant, we were so excited. The new restaurant, BLU BASIL opened this week. This restaurant was highly anticipated by many. This was clear within a few minutes of the doors opening. We arrived right when the restaurant opened. 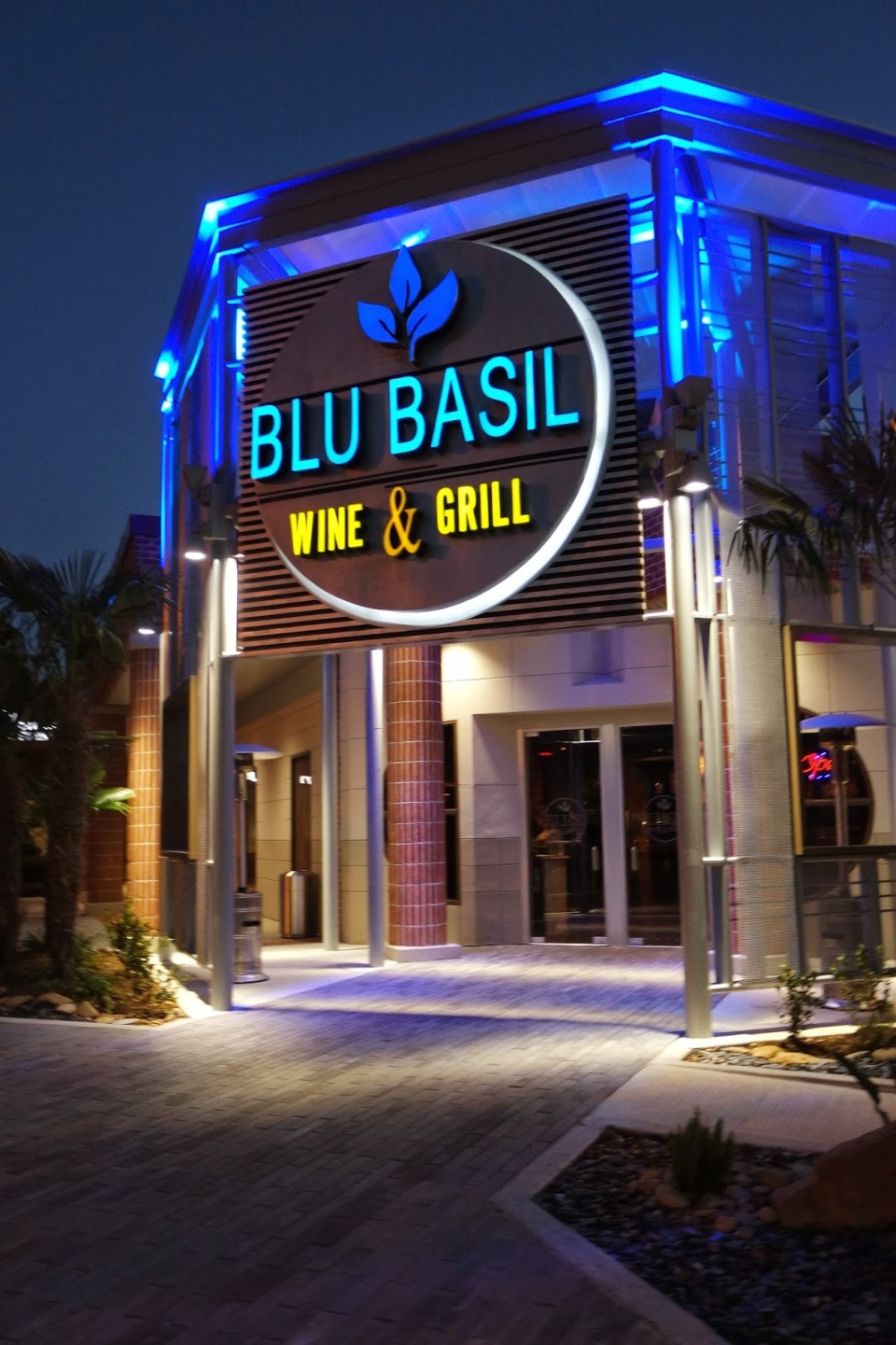 BLU BASIL took over the old Chung King building. Upon entrance into the building, we were blown away by the transformation. The restaurant had been gutted and redesigned with a modern/contemporary feel. The inside was beautiful.
There is a wall waterfall on the right side. The bar area was on the left side. One of the things I like is that the bar is sort of separated from the restaurant.
In addition, there are Flat Screen Televisions near the bar. Which will be a great hit. Especially during those major sporting events. This is also great for those who may be dining alone. 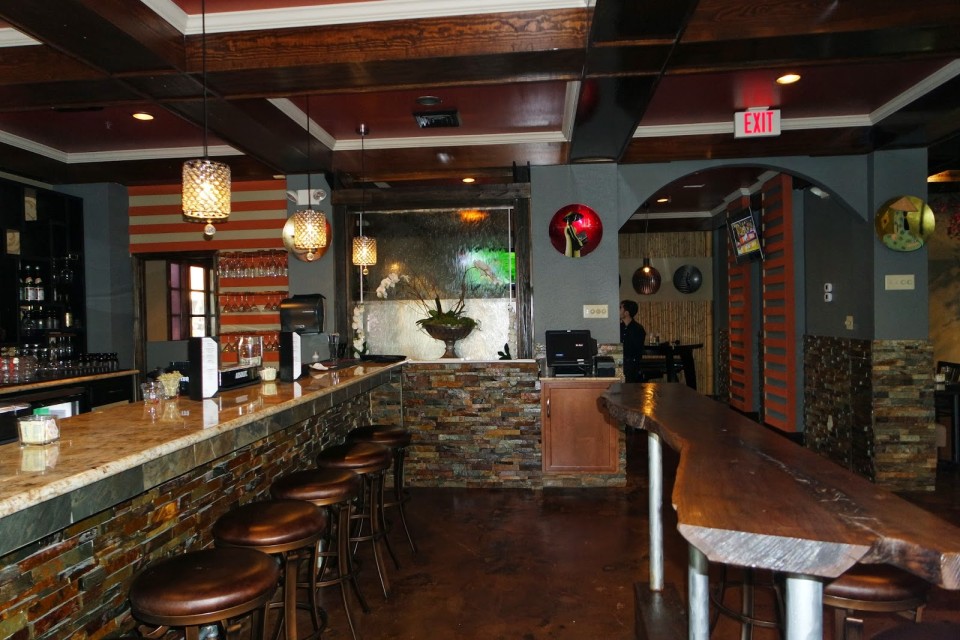 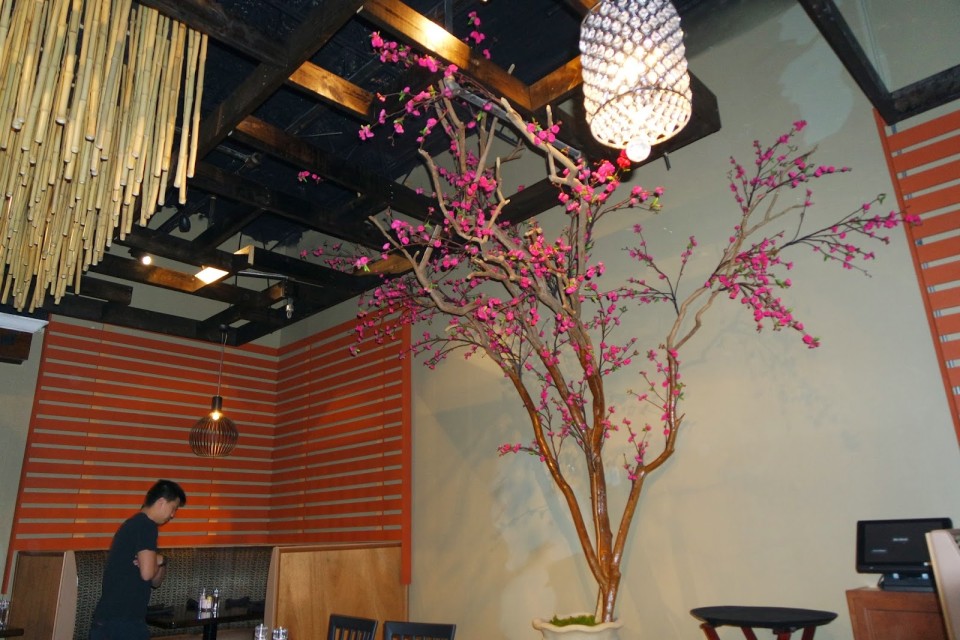 The restaurant gives every table Shrimp Chips. The shrimp chips are crispy with a texture similar to that of Pork Rinds. The Chips weren’t bad at all. Nice treat for the table. 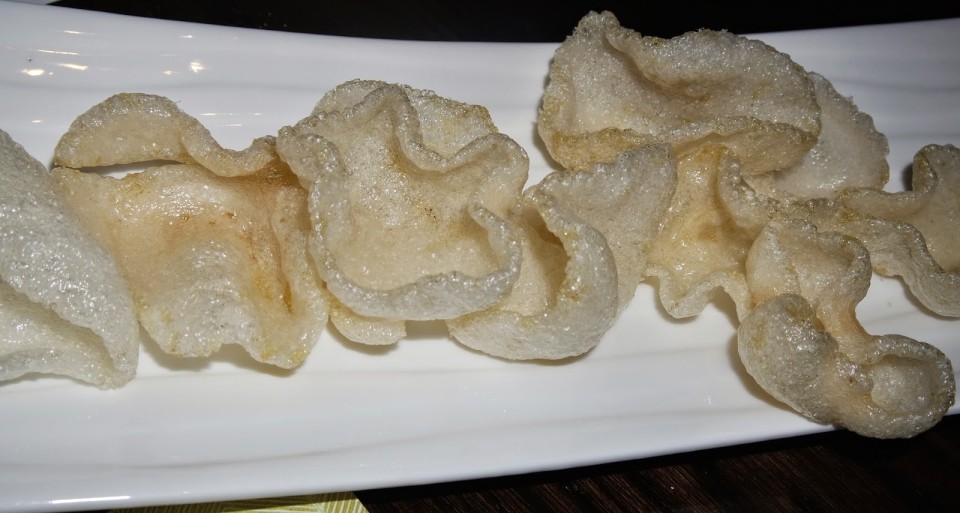 We ordered two teasers/small plates. The Banh Mi Bites. This is a bite size toasted french bread sandwich. You can choose from grilled chicken, pork or beef. The bread was not hard like your typical french bread. The bread is topped with a spicy mayo, cream butter sauce, shredded carrots, cucumber and cilantro. The sandwich was light. I liked the veggie selection for the topping on the sandwich. The spicy mayo/cream butter sauce was delicious on the sandwich. The only down side is they called it bite size, so I envisioned something a little smaller. But overall it was a delicious small plate. 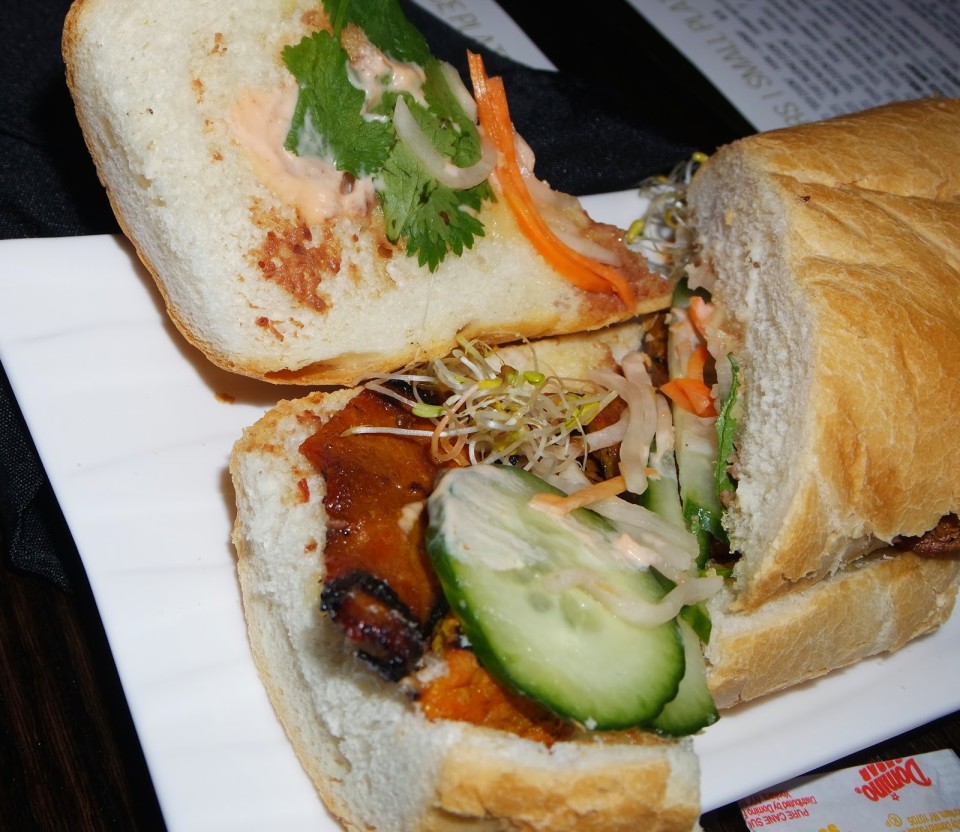 The other small plate was called Rock “N” Roll. The small plate was similar to that of an egg roll. It was stuffed with pork and deep fried served with a homemade duck sauce. This was pretty good, but I will say, I wasn’t blown away. The bib lettuce and sliced cucumber and shredded carrots really enhanced the presentation of the dish. 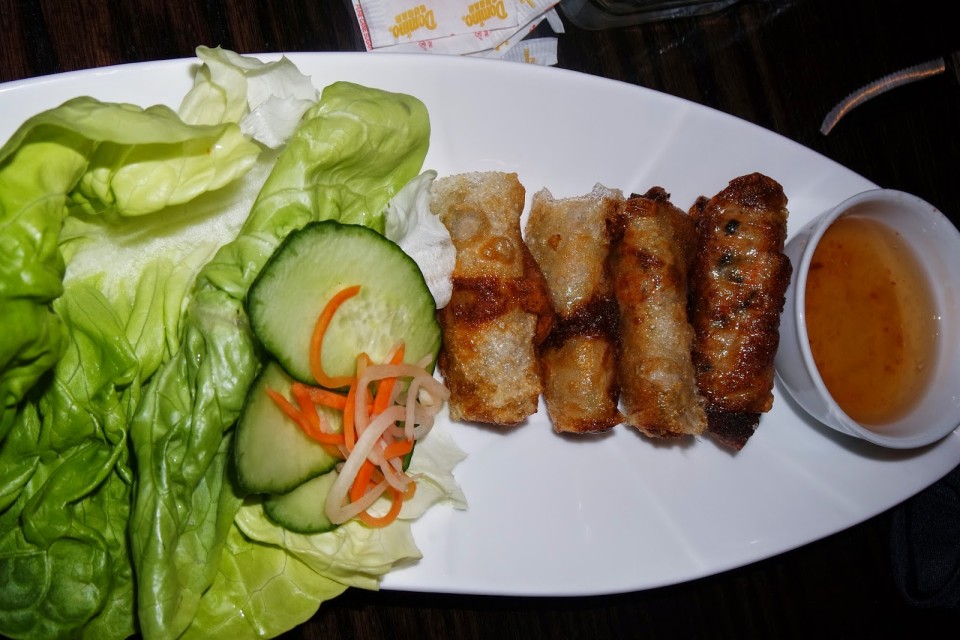 The only complaint concerning the small plates was that we were not given small plates until we were almost done eating. The server recognized this on his own. 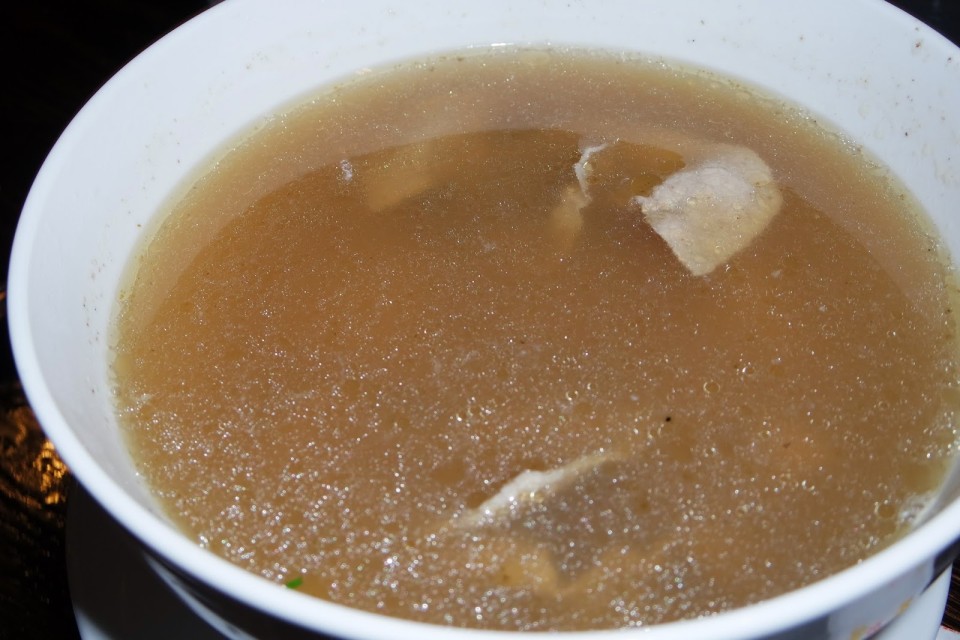 BLU BASIL has a kids menu. Which is always a plus in our eyes. The kids menu is reasonably priced as well. My daughter ordered the Steak PHO which consisted of a delicious broth with sliced steak and clear noodles. My daughter absolutely loved it. The PHO kid options were chicken or pork as well. The other options for kids was the rice bowl or vermicelli noodles bowl with egg roll and the choice of beef, chicken or pork.

My husband ordered the Hu Tieu, which is a clear noodle soup. The soup consisted of quail eggs, shrimp, pork in a pork broth and clear rice noodles. The dish was packed with flavor. Also green onions, cilantro, bean sprouts, lettuce and jalapeño peppers. 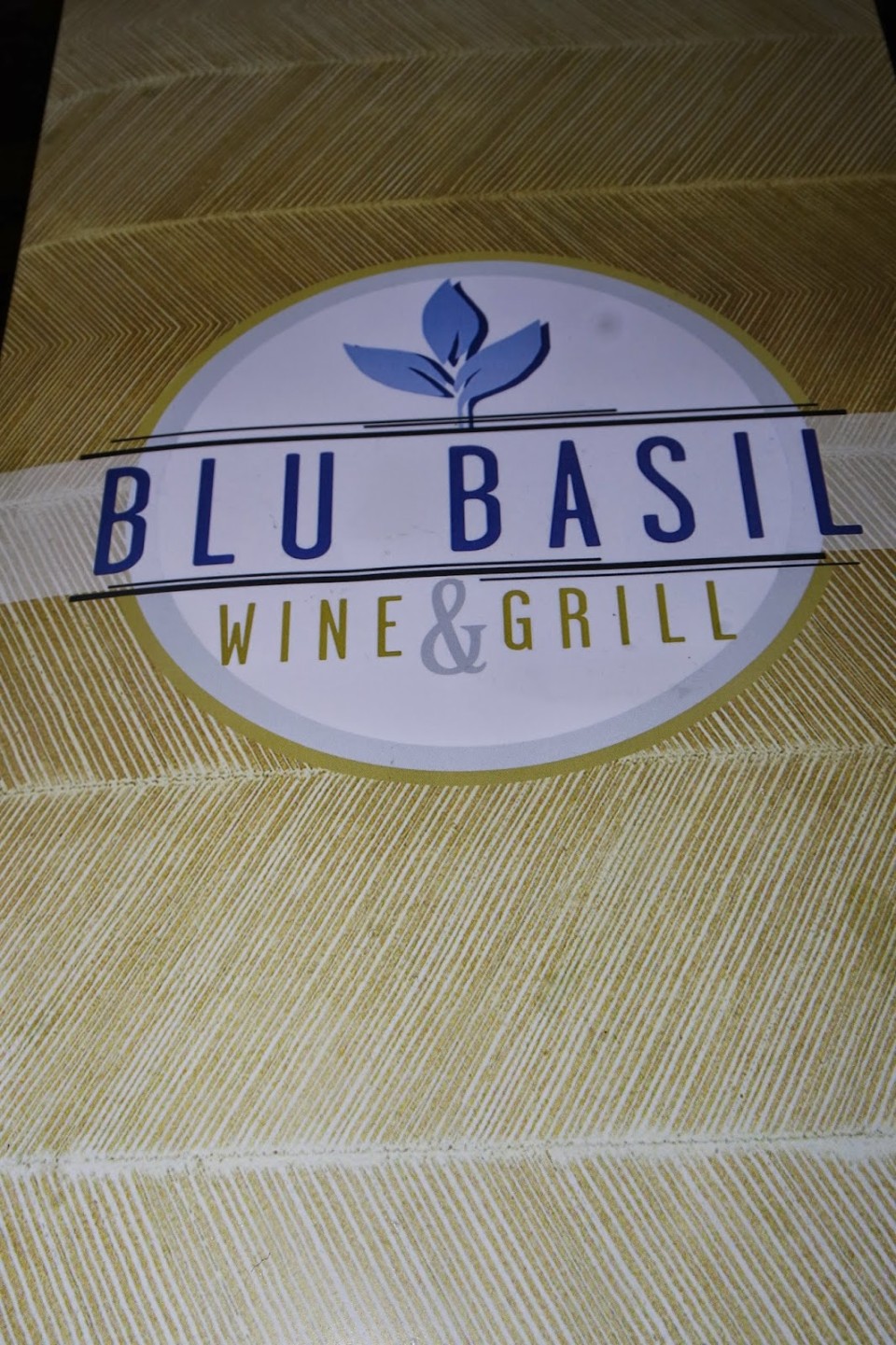 Overall our experience at BLU BASIL was awesome. The service was incredible. The restaurant was very pretty and classy and clean. I would suggest they work on their homemade lemonade because our drinks were watered down and very sour. One other suggestion would be a sign as to where the restaurant bathroom is located for moms with children.
Vietnamese cuisine is very different and not for everyone. But we are a family that loves many different cuisines. Vietnamese cuisine has become one of our favorite food to dine on. I definitely recommend that you would try this restaurant.
The menu also offered Vegetarian Menu Options.
The restaurant had a consistent flow of people from the time we arrived till we left. When we left the restaurant was packed and there was a line of people waiting for a table. So I would definitely suggest you arrive early for dining or call for reservations.
BLU BASIL is located at 5451 Johnston Street.