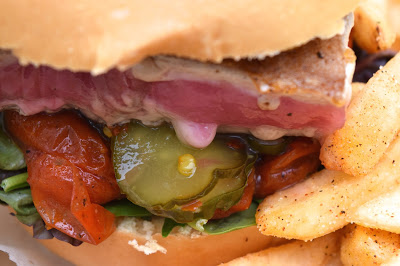 The Bus Stop is a Food truck that looks like a small bus. But don’t let the small bus fool you. The owners are developing delicious items served between a bun that are packed with flavor. The Bus Stop serves delicious Burgers/Sandwiches and Fries. 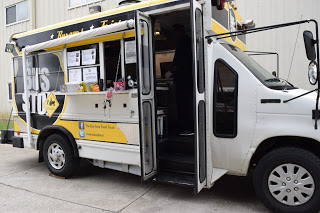 The interior of the bus is not very large, but that doesn’t stop the cooks from getting the job done. My husband and I had an opportunity to enjoy a few of their menu items and talked with the owners.

We tried 3 different Burgers. Below is the Le Boucher Burger with Andouille Sausage, Pomegranate Pepper Jelly, Baby Lettuce and Garlic Cream Cheese Aioli. The burger was very different, but packed with flavor. Jelly is not one of the things I think of when adding condiments to my burgers, I must say that it worked well with this sandwich. 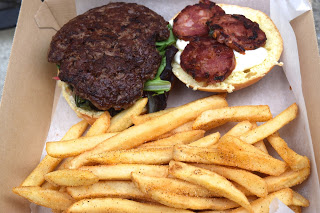 The Le Boucher is one of the Customers’ favorites. A lot of the people we spoke to said make sure to try the Le Boucher, it is so good. I have to say, they were right. This burger was superb. The grilled andouille was delicious. The burger patty was seasoned well and had a nice kick. The jelly added a nice flavor to the burger. The Flavors worked on this burger. 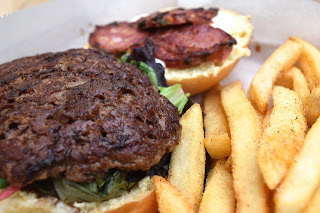 The Ahi Tuna was very good. All I kept thinking was wow, I know my health conscience readers will love this one. I was very impressed with this sandwich. The Ahi Tuna was seasoned and grilled. The toppings included a spicy mango ketchup, mixed baby lettuce, a black pepper pickled red onion and charred cherry tomatoes. 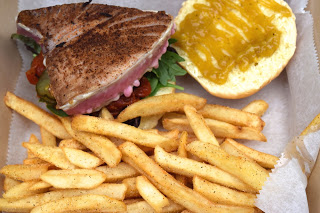 The Ahi Tuna was light with toppings that complimented each other very well. This is a great alternative for those who may not eat meat or may want a light sandwich. The charred cherry tomatoes and mango mayo was a good choice. Each added powerful flavor to the sandwich. 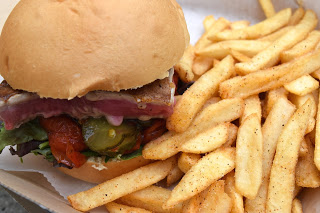 The last burger we tried was The Cowboy Burger. This one was my husband’s favorite. A burger patty dressed with caramelized red onions, BBQ Aioli, mixed greens, charred cherry tomatoes and pepper jack cheese. 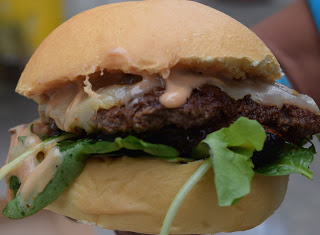 The caramelized onions with gooey pepper jack cheese together was so good. The burgers were all served with fries. The seasoning on the fries was delicious. A concoction that is tasty and delicious. 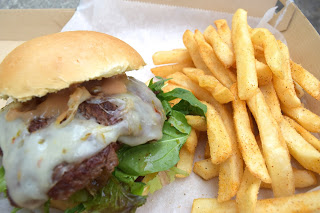 The patties are a blend of chuck and ribeye. Each of the burgers had a different flavor or taste that stood out. After eating the food and checking out the toppings on each burger, I could tell whomever was developing the recipes was very knowledgeable in food and flavors. 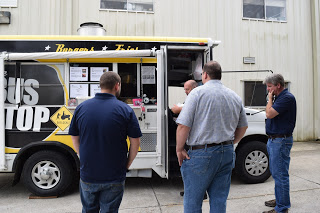 One suggestion would be tables to set up that the customers can stand around and eat on. Also I would suggest an alternative to the fries maybe plain baked chips, pickles or zucchini chips. 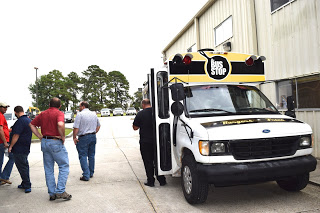 The Buns are baked locally and were so good. Perfect for the speciality burgers that they are cranking out. One of the owners, Charles mentioned to me that when choosing the buns for their burgers, it took him 3 months to find the right one. He wanted to make sure that the buns could be baked over and over again and taste the same. 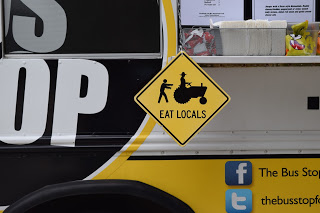 Jay Thornhill and his brother Charles Von Aspen are the owners and operators as well as the help of their right hand man, Brandon Felix. 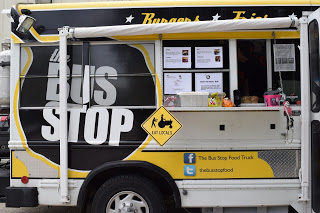 Charles had an interesting story as to where his passion for cooking came from. His dad was a horrible cook, which encouraged him to cook for himself. He was a Front House Manager at a Hotel in California. He would often speak with the Food and Beverage Director at the hotel and Charles would ask many questions. Charles trained for free in the kitchen with the director, who later advised Charles to attend Culinary School. 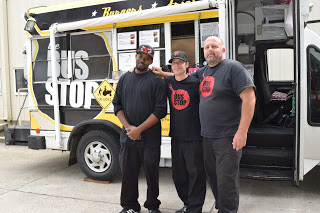 Charles develops the recipes. Great detail and experimenting goes into the development of the burgers and the toppings.  The Menu stays the same, but a special burger is served each day.

I was very impressed with the burgers. I think the Bus Stop is a hidden gem on the Food Truck Scene.

I’m a bit of an overpacker. There have been time

Dinner on a boat within the resort. How cool is th

No birthday celebration is complete without desser

Celebrated my birthday 🥳 at Disney Springs. If

Officially out of office for the week. Great fligh

Strawberries 🍓 are my favorite fruit. I love st

It’s Summer time and Grilling is always a good i

Meatball subs are quick and easy. Only requires a

My kids are pizza 🍕 fanatics. They never pass o

After a day of errands with my daughter we stopped

Po-boy kind of night. Shrimp po-boy is always a hi

Steak Night Family Style at the Dumas house. Our