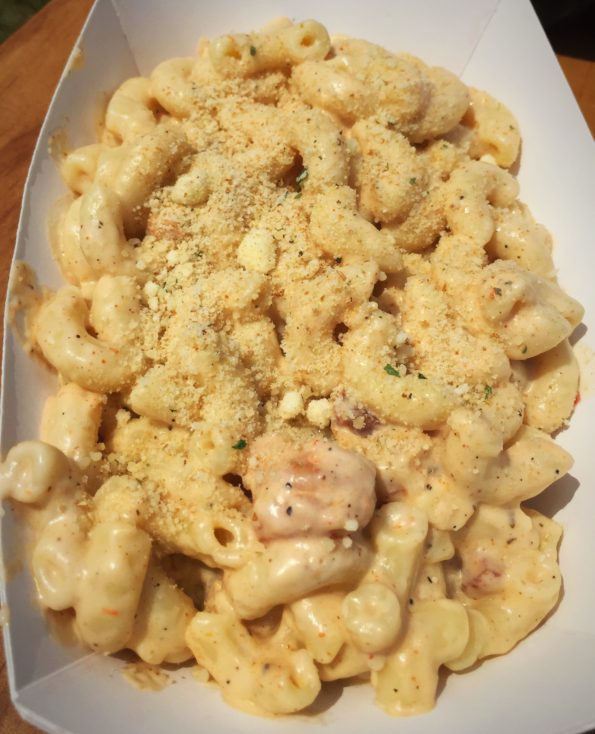 A few blog post ago, I talked about my hubby and I taking an overnight trip. This blog is going to pick up where the Bobby Hebert’s blog left off. 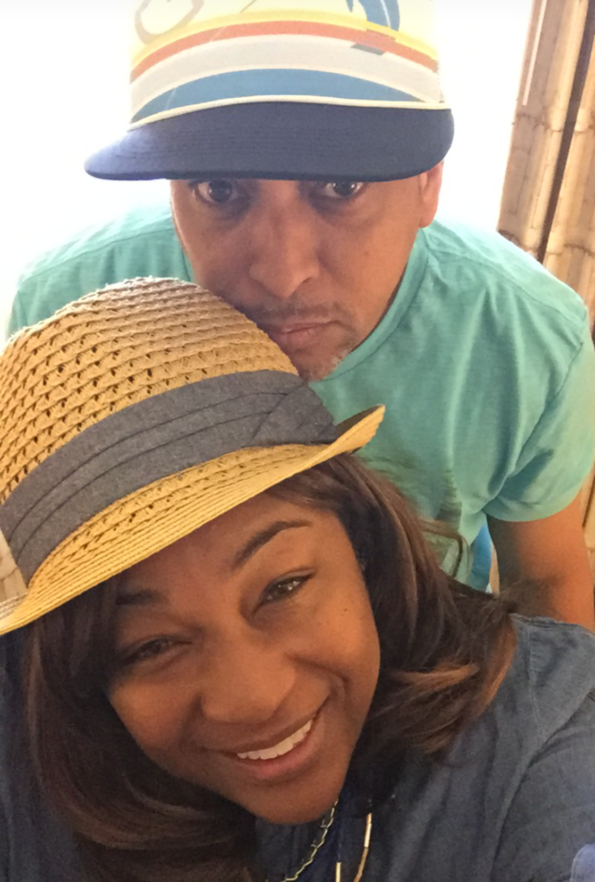 We arrived at the Louisiana Seafood Festival and headed to the check-in tent. The check-in process was very organized. 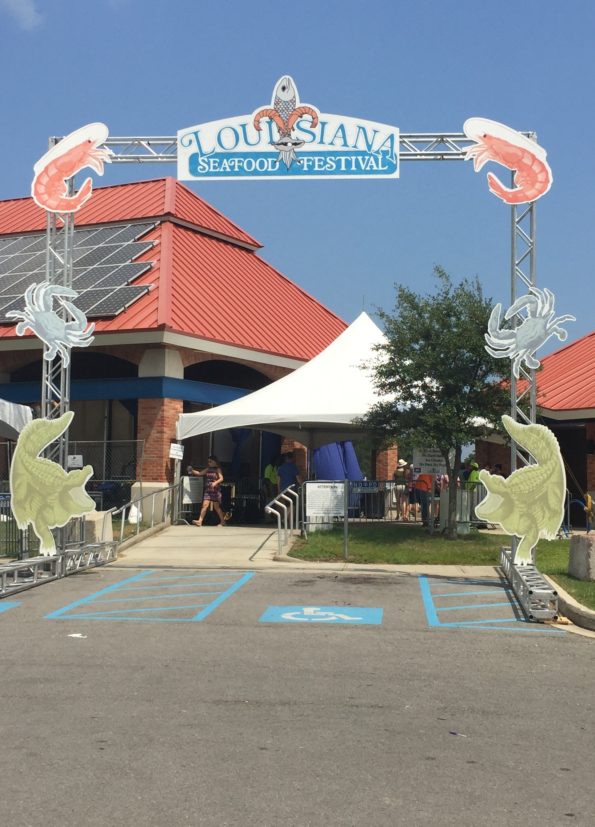 After checking in, we headed straight to the WWL-TV Cooking Pavilion. Our timing was perfect, the chef of Commander’s Palace, Chef Tory McPhail and his team were preparing to start their cooking demonstration. 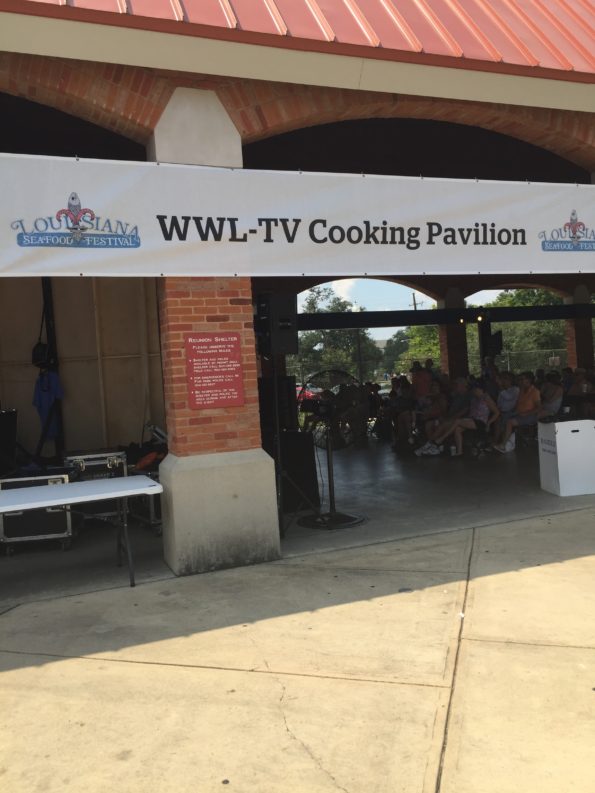 Chef Troy has appeared on several cooking shows like Top Chef, Bobby Flay’s Food Nation and Paula’s Party with Paula Deen just to name a few. He is also received the James Beard, Rising Star Chef award and Best Chef South. These are only a few of his accomplishments. 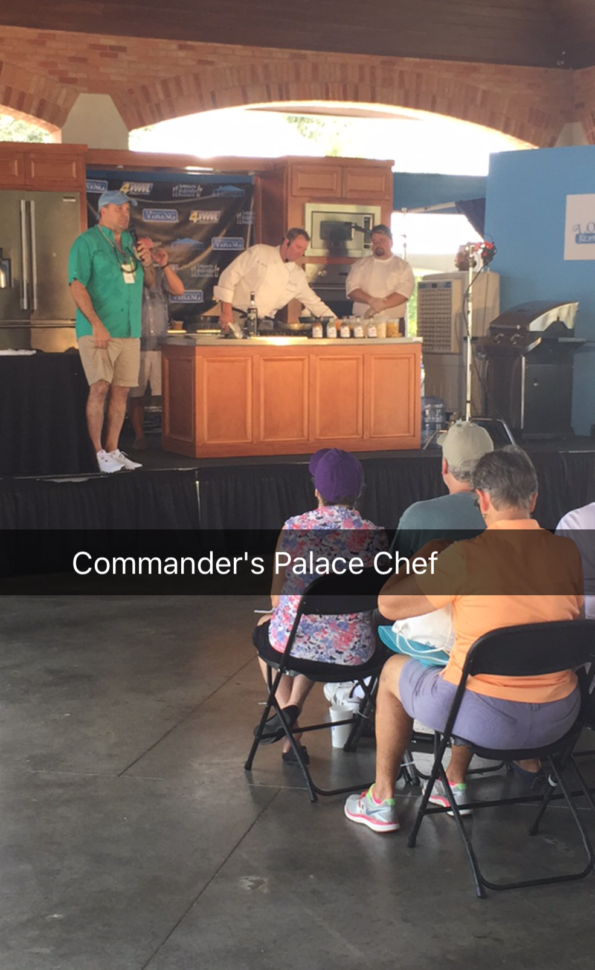 Chef Troy had a very informative cooking demonstration. He spoke a little about his background, when he started cooking, where he cooks now and his favorite dishes. 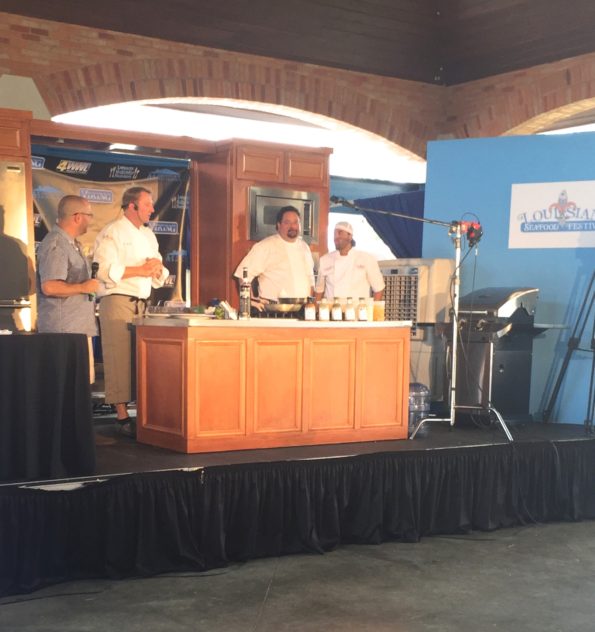 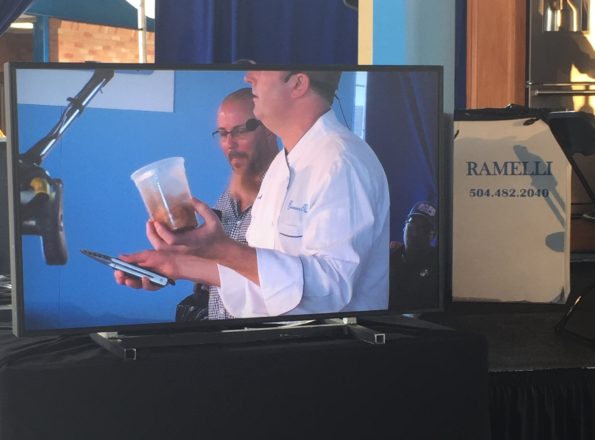 He discussed each component of his salad. 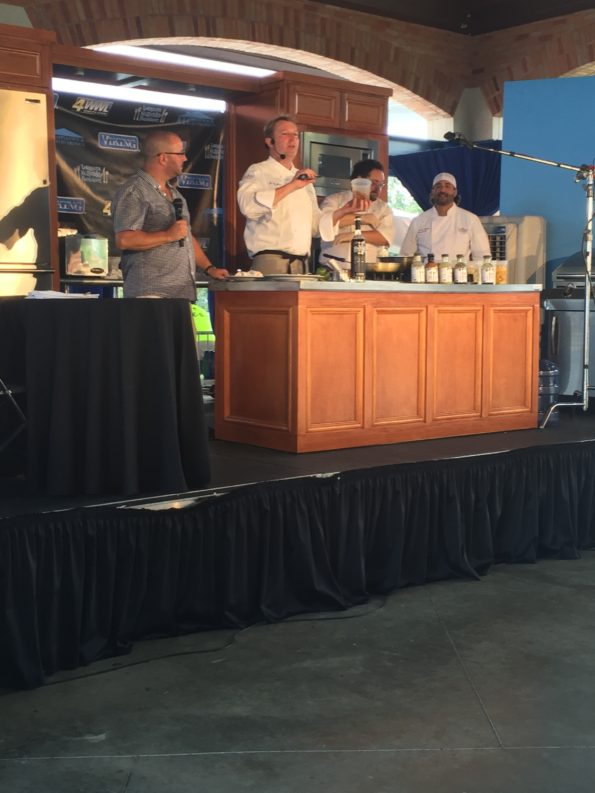 We were able to see Chef Troy prepare each step of the salad. 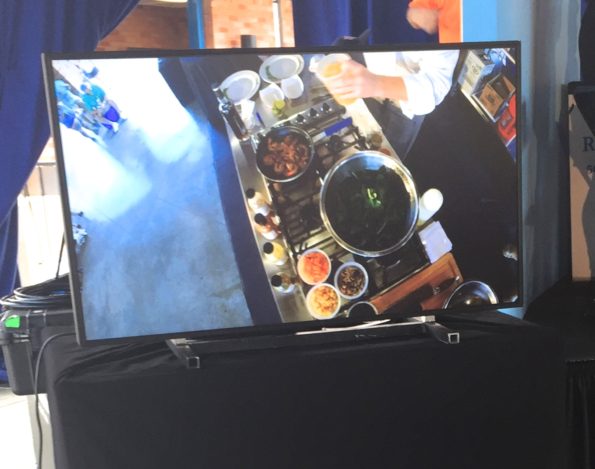 The shrimp was grilled perfectly. Chef Troy came down from the stage and allowed us to see the shrimp after they were grilled as well as allowed us to taste and smell the powerful aroma of the dish. 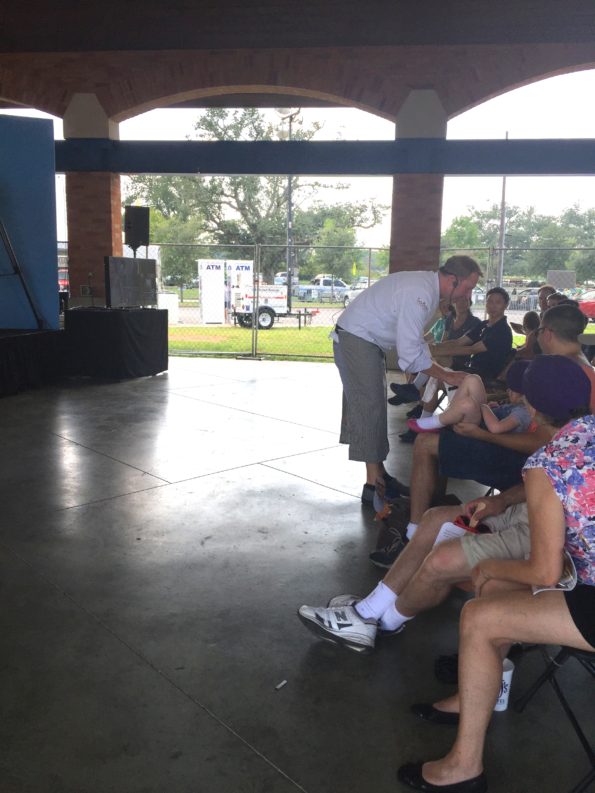 The salad was colorful and beautifully presented. 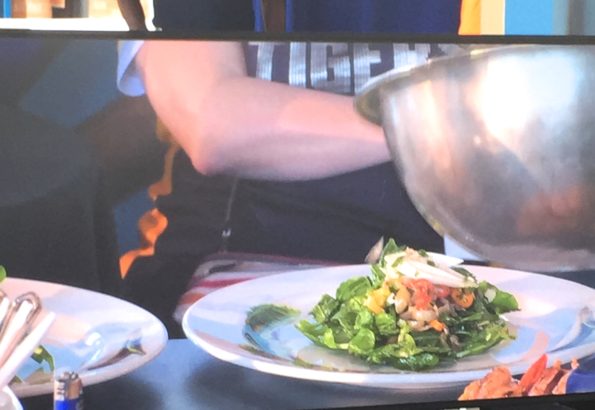 The salad prepared was a Citrus & Pineapple Lacquered Shrimp. 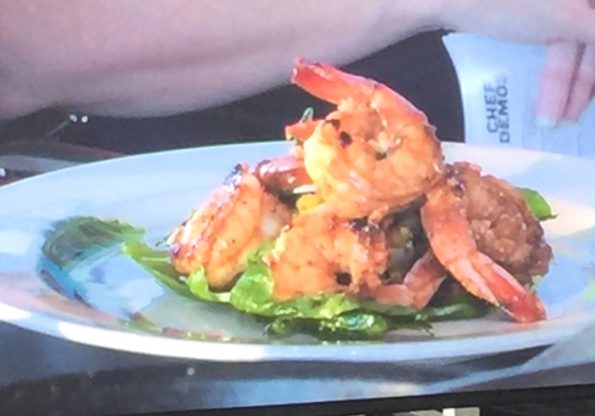 We were allowed to sample the salad. The salad had a bold taste with layers of textures and flavor. So good. Not your normal salad from home. A gorgeous salad. 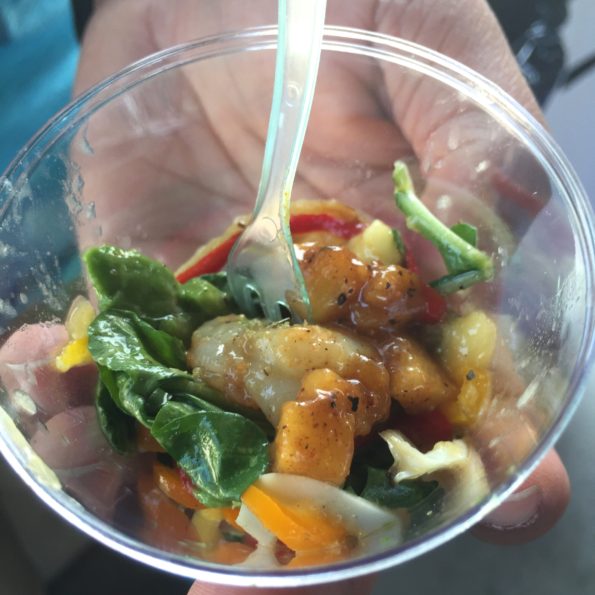 Chef Troy also introduced his Salad Dressing line. A variety of flavors, Coconut, Key Lime and Curry, Pineapple, Ginger & Cayenne and many more. Available in Rouses and other stores.

There were many cooking demos throughout the weekend under the pavilion.

After watching the cooking demo, we headed to the Festival grounds where the band and the other food booths were. 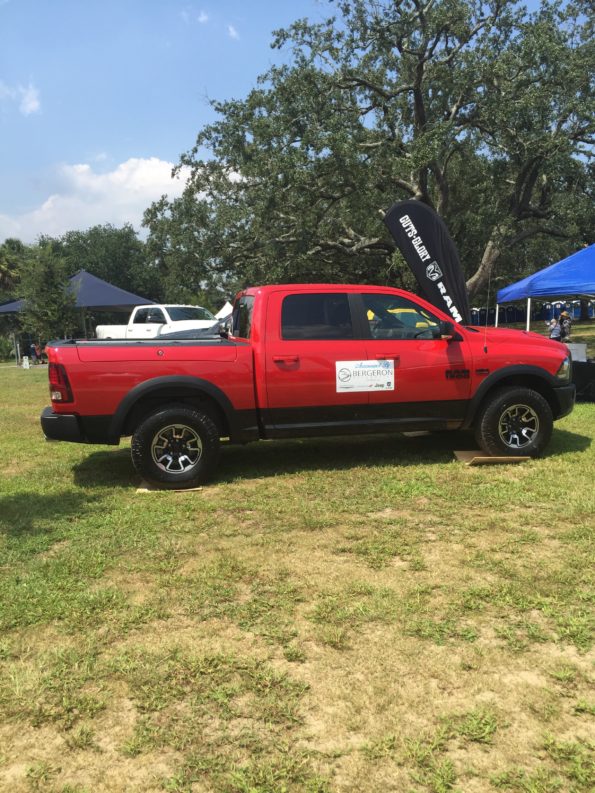 There were other tents set up conducting surveys with a variety of giveaways. 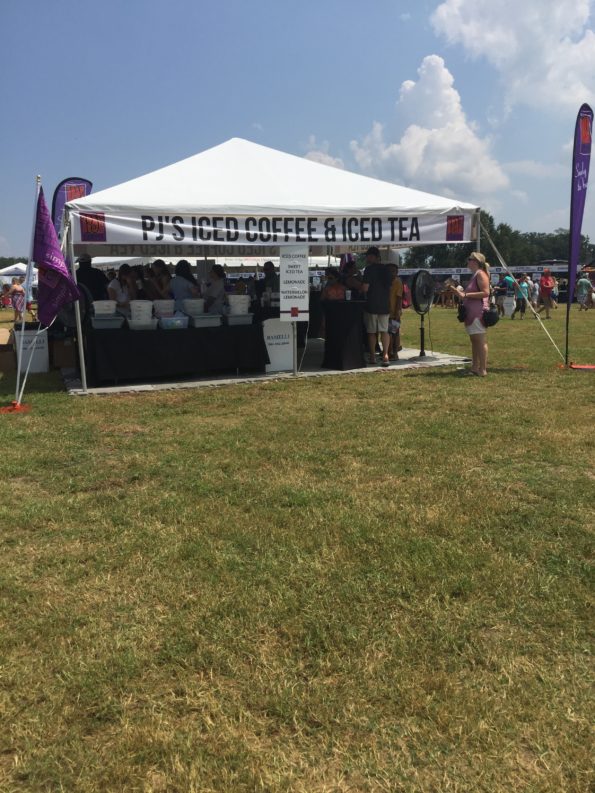 Our first stop was the drink tent. It was so hot. PJ’s was serving fresh squeezed lemonade. 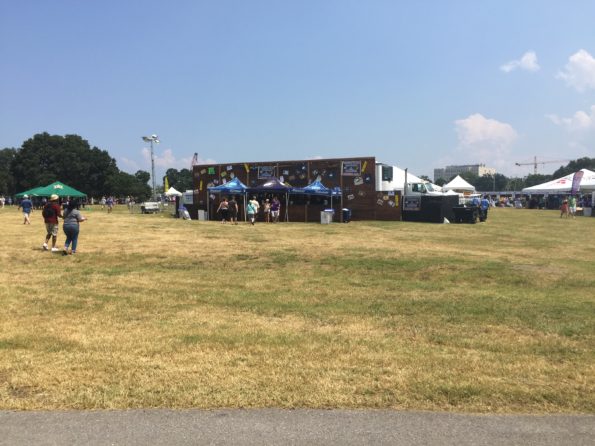 The hubby & I checked out the different booths before choosing where we would eat. 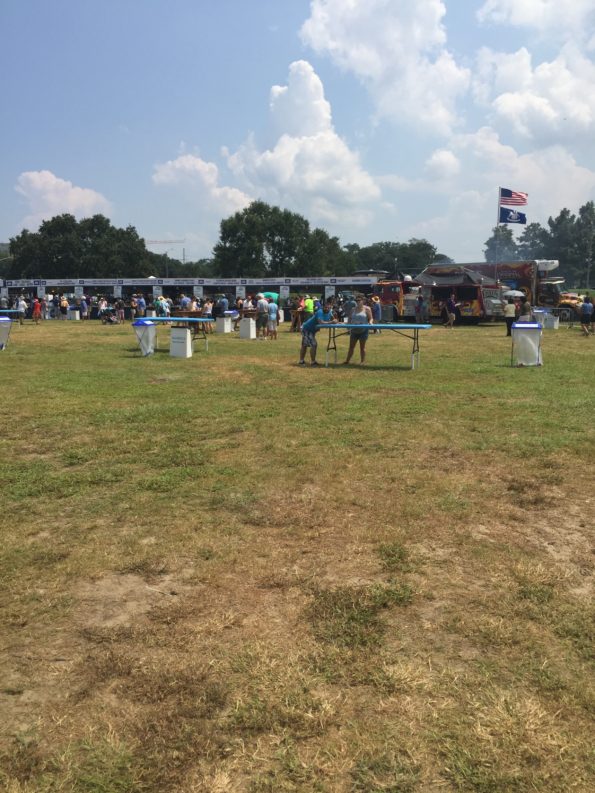 We decided to try the Dirty Dishes booth first. I follow them on Instagram and I wanted to give their food a try. We ordered the Dirty Mac. 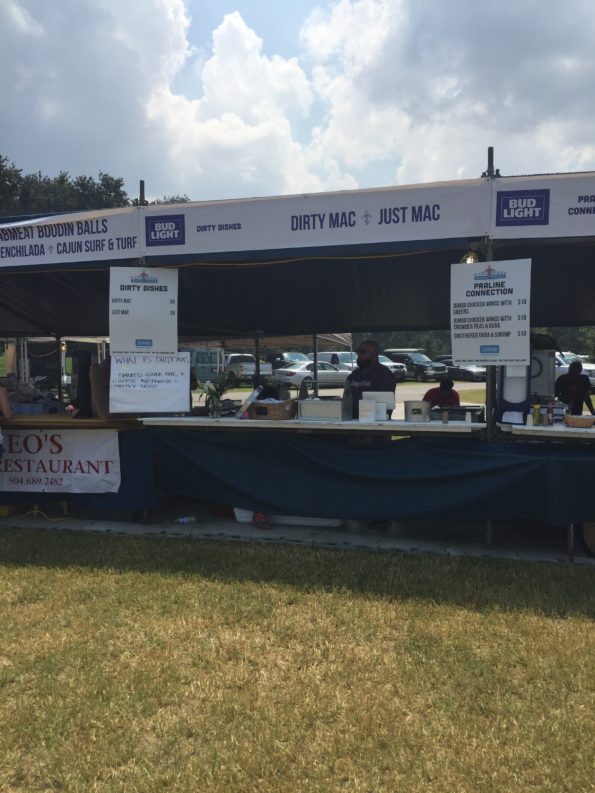 The dirty mac consisted of smoked mac and cheese with crawfish and turkey tasso. So good.

Creamy with a smoky flavor with lots of cheese. Yum yum. A really good mac and cheese. 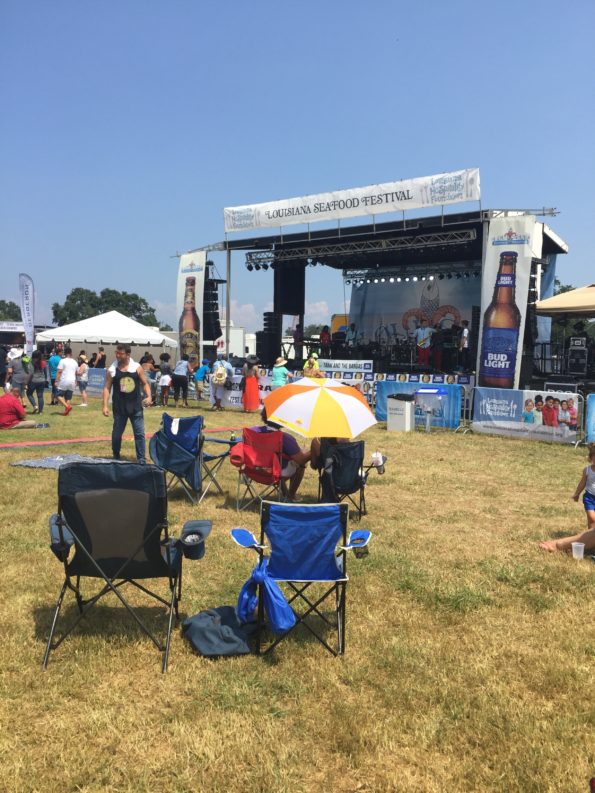 After eating the Mac n Cheese, we headed to the Festival stage to check out the band that was coming to the stage. 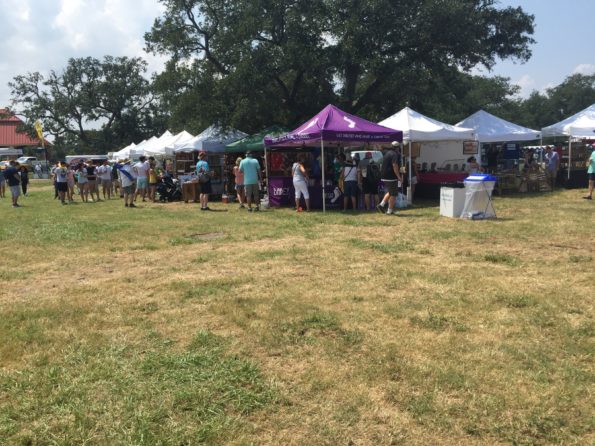 In addition to food booths, there were some art booths with personalized items, handmade items and paintings, etc. 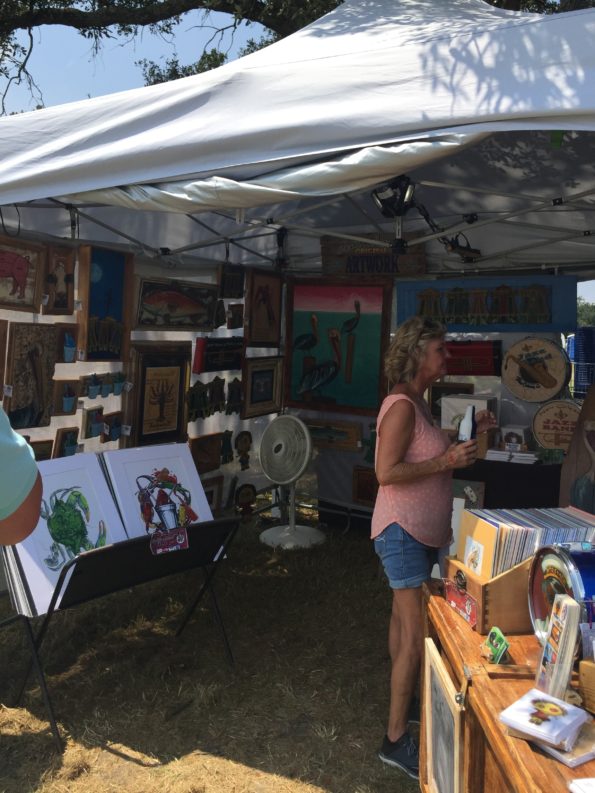 Some really neat items for sale. 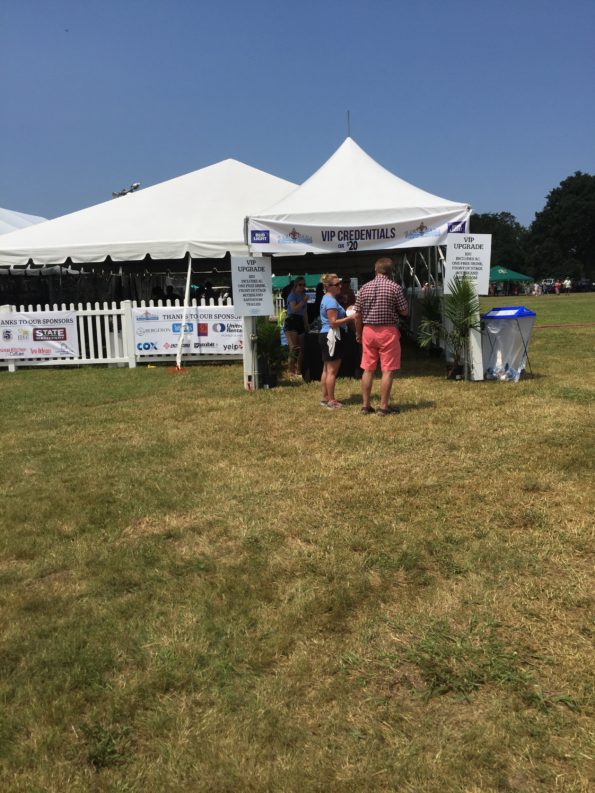 The weather was nice for the Festival but it was super hot, so we decided to go to the VIP tent. The VIP tent was cool, comfortable and they also had the game on a big flat screen TV. A plus indeed. 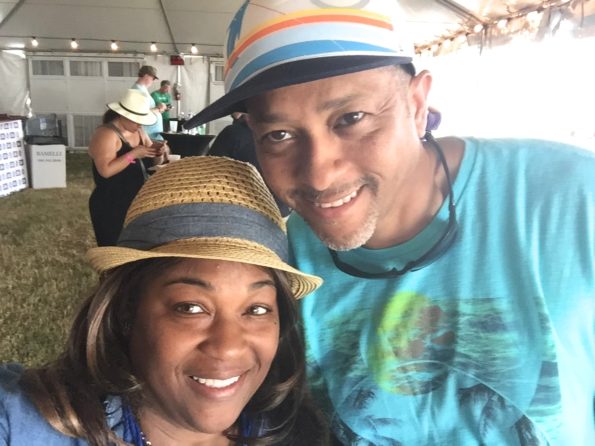 We mingled a little and met some cool people that were from up North and they were moving to Louisiana. A great time. 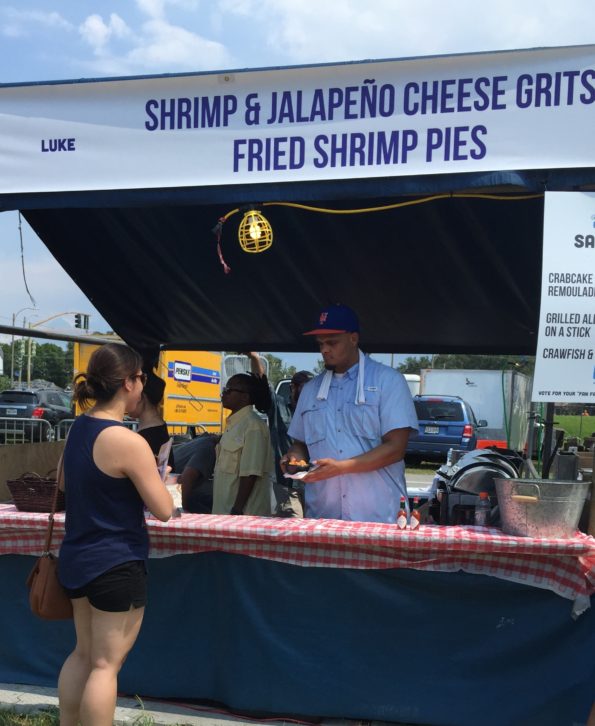 After cooling off and mingling a little, we headed to Luke’s food booth to try their Shrimp and Grits. 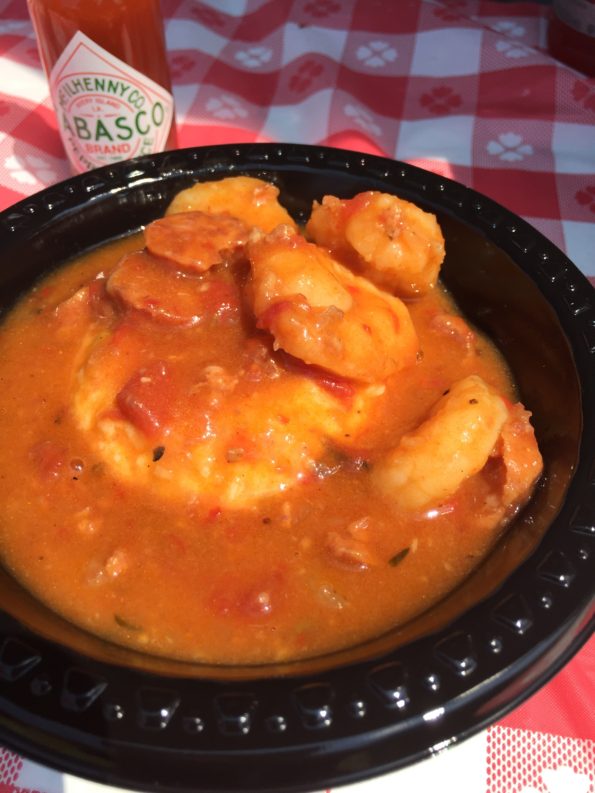 The shrimp and grits was Shrimp with Jalapeño Cheese Grits. OMG!!! So good. The dish was superb. The grits was the right spice level, the sausage and the shrimp were cooked perfectly. The flavors complimented each other well. Yummy. 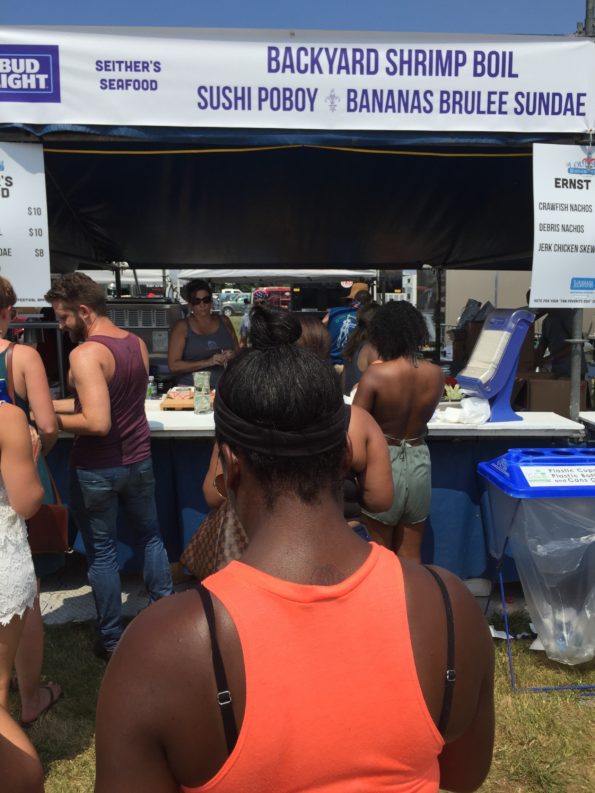 We also ordered the Sushi Poboy. The poboy consisted of blackened Ahi Tuna, Crab, cilantro, spicy mayo, cucumber and carrots. Really good. The dish was presented well. I liked that the dish was served with chopsticks.

A pretty cool idea. Pretty much, a sushi roll in a Poboy bun. Yummy. 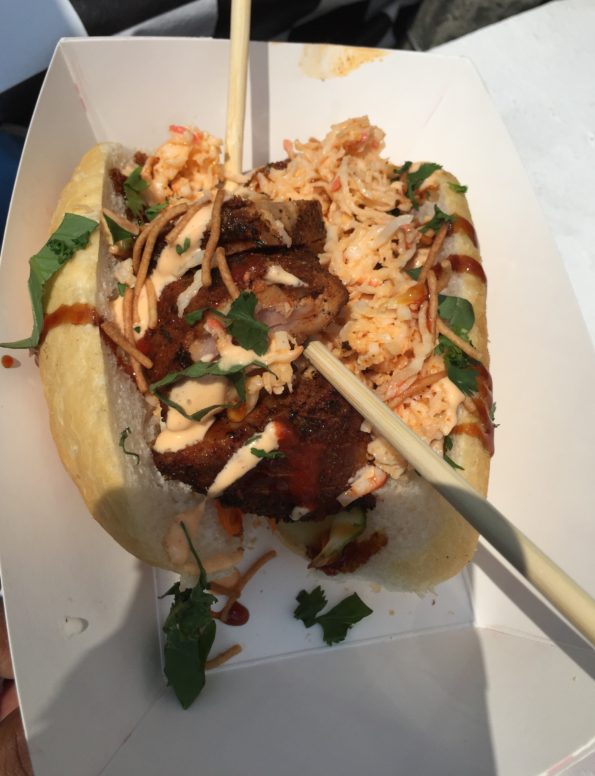 The textures were different but this dish was prepared well. With each ingredient complimenting each other well. Superb. 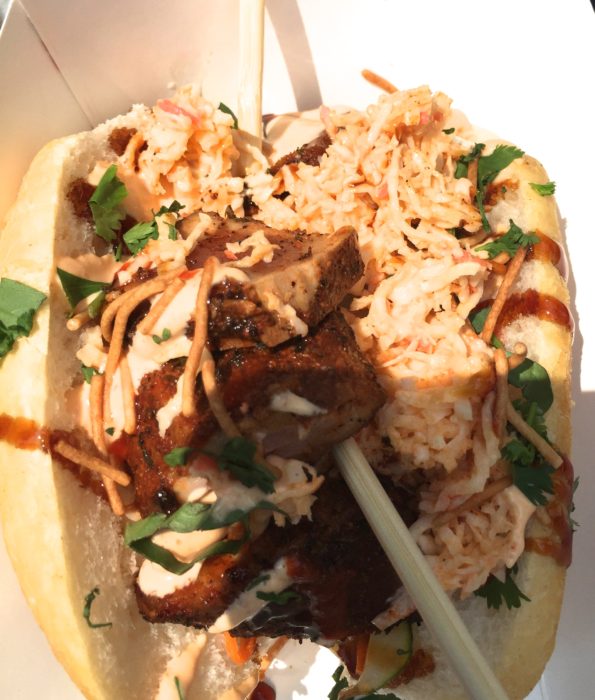 We took the dishes back to the VIP tent and shared each. The dishes were both really good. I will say it was better to enjoy the dishes under a cool tent.

If you have never attended the Louisiana Seafood Festival, I highly recommend it. The event is a family friendly event. There are things for the kids to do. Lots of food items to choose from and the cooking demos were awesome. 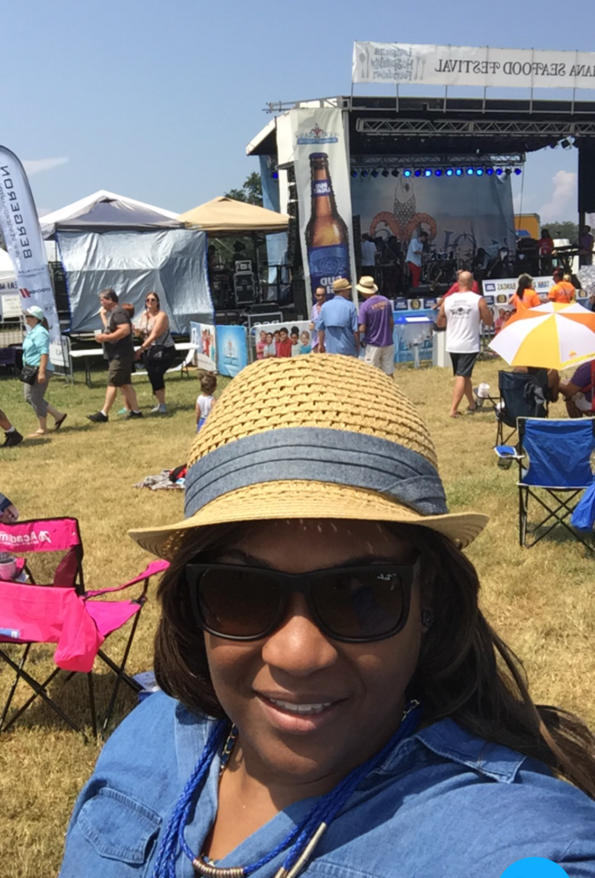 Go on over and check them out next year and be sure to tell them that Da’Stylish Foodie sent you!

My family & I checked out The Burger Joint in the

I am a Tea Enthusiast. I am a Tea Lover. So I am t

Busy nights mean an easy meal. My Instant Pot is a

We aren’t big on Leftovers but Thanksgiving left

This year we have so much to be thankful. Counting

As you prepare your menu for Thanksgiving day, don

Some days my crew wants a Rice and Gravy meal. Thi

Fish Fry Friday is here. Tried something a little

Blessington’s Farms is all things Fall. From Ani

New recipe is up just in time for Thanksgiving, my

Sweet Heat Pickled Fried Ribs is what’s on the m

Pies are one of our favorite desserts for Thanksgi

Christmas will be here before we know it. Over the

Side dishes are just as important as your meat cho

Kicking back this Sunday with a brand new cookbook

Brand new Restaurant Review is up. My family and I