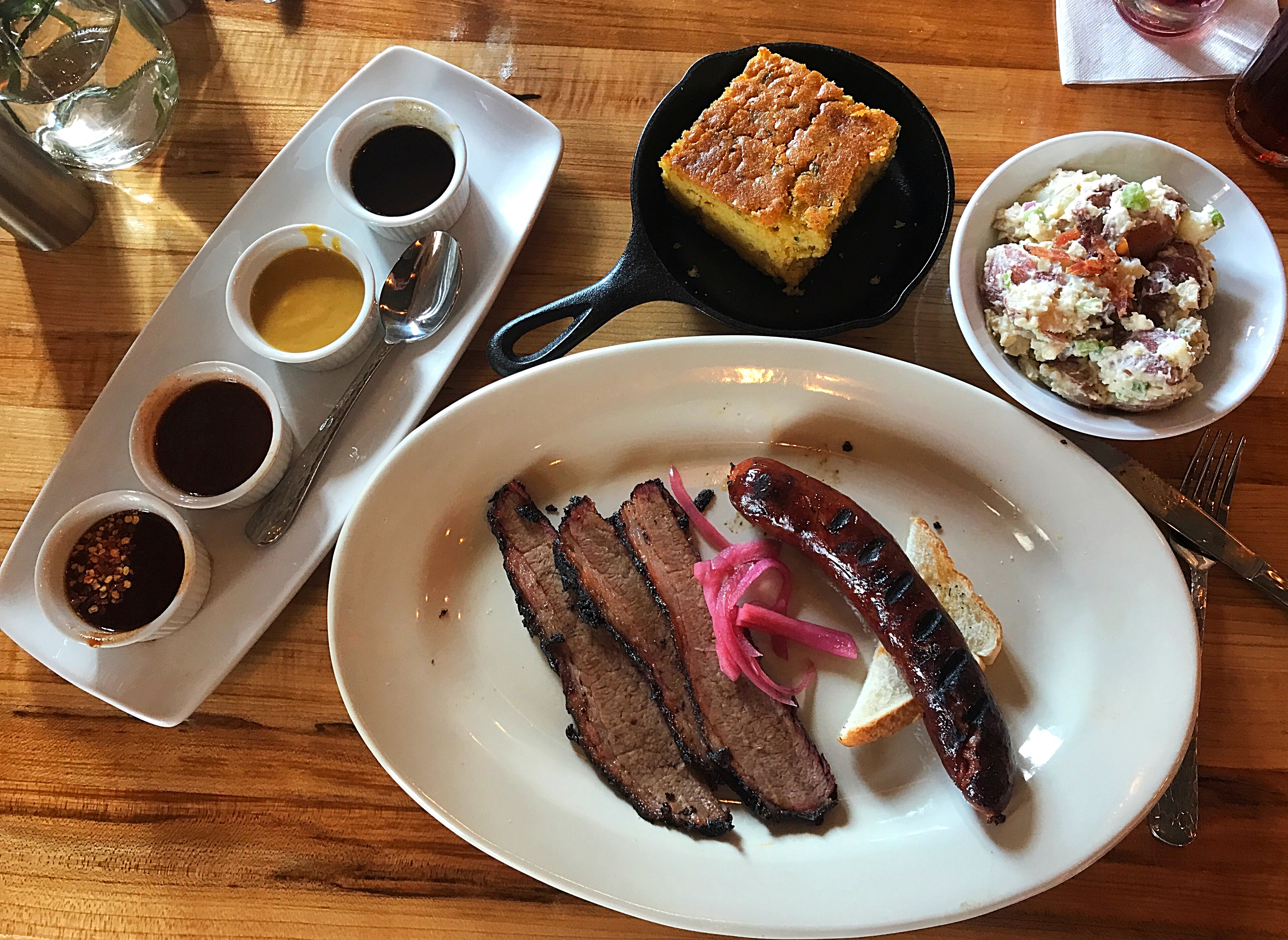 The hubby & I recently headed to Baton Rouge to check out the newly opened BRQ Seafood and BBQ Restaurant.

A few months ago, we attended an event at the Louisiana Culinary Institute. And at the event, the Chef showcased a few of his dishes giving us a taste of what we could expect at the new restaurant.

Some of the dishes blew us away.  So you know after those teaser dishes we were ready for an amazing dining experience. We had extremely high expectations for the restaurant. 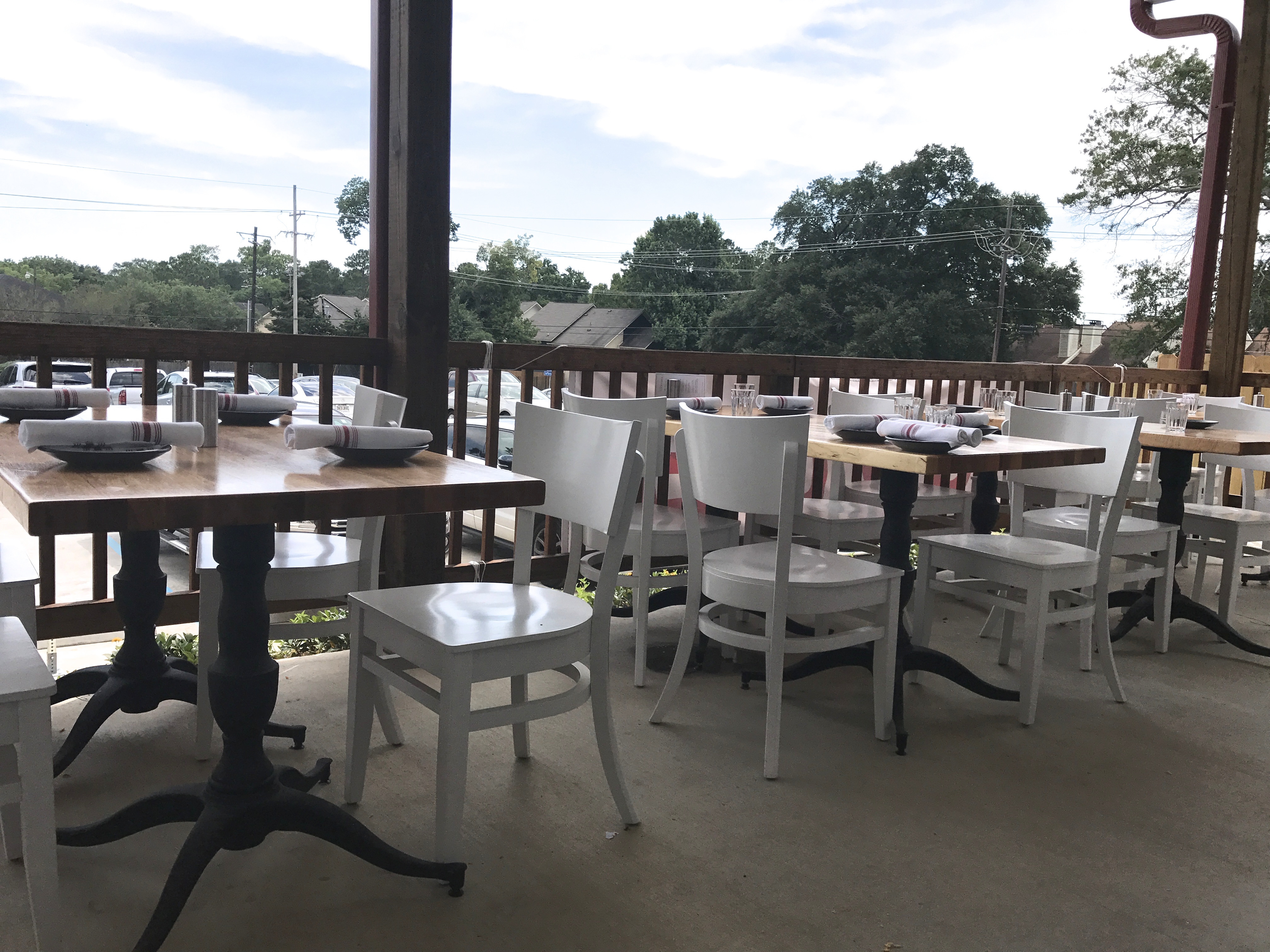 We arrived at the restaurant and loved the look of the exterior.  Simple but clean looking. There was outdoor seating available outside on a covered patio. 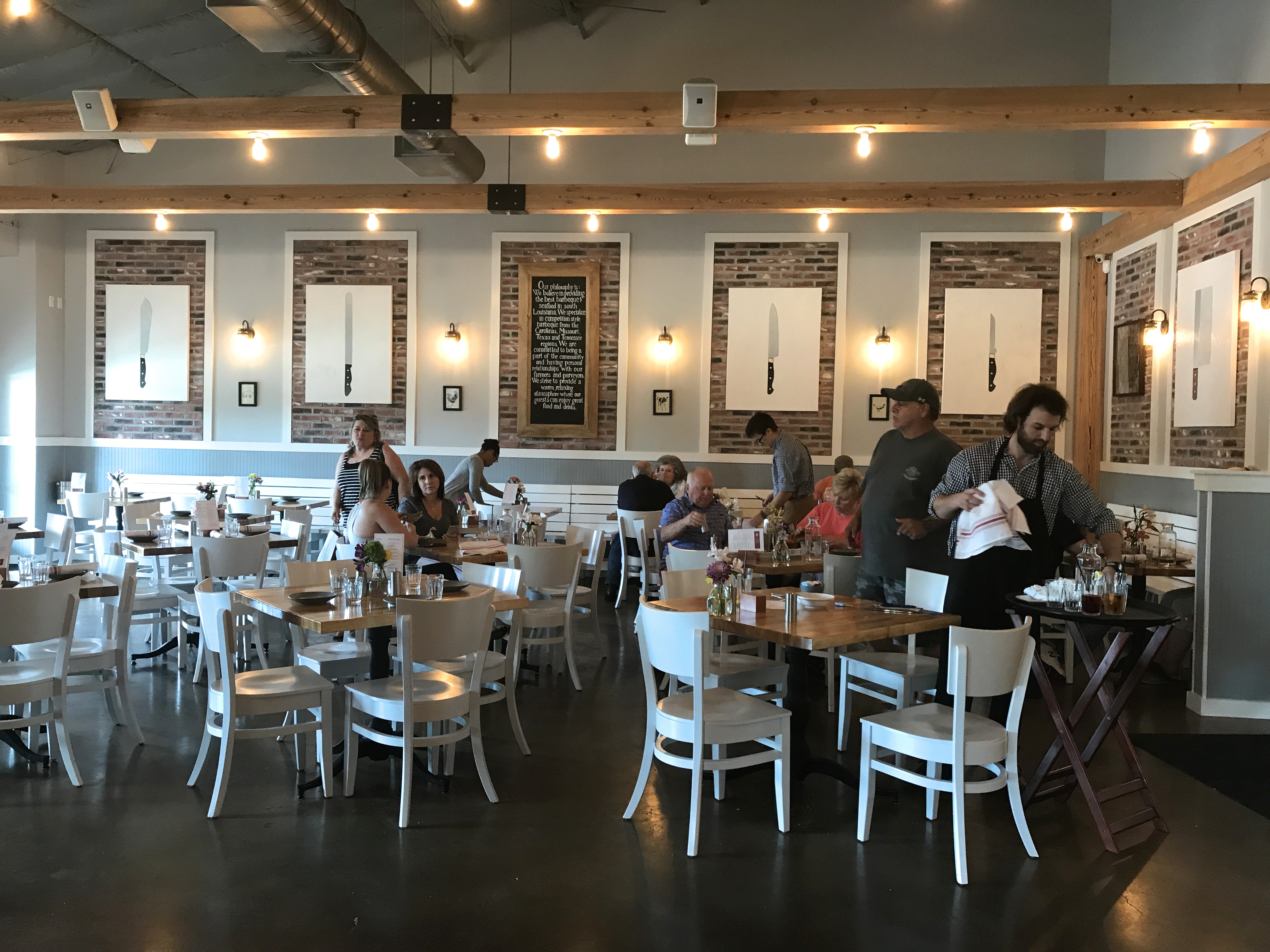 As we entered the restaurant, it reminded me of a couple different restaurants I love, Dark Roux, Willa Jean and The Social all in one. There were chalkboards throughout the restaurant. The restaurant was wide open and the tables had a good amount of space between them.

We approached the hostess desk and asked for a seat. To our surprise the restaurant was on a shift change, which meant that we would have a wait. Unfortunately, the website didn’t say that when I checked for the hours of BRQ.  So I said all that to say, they close between 2 and 3 for shift change and to finish the lunch rush. 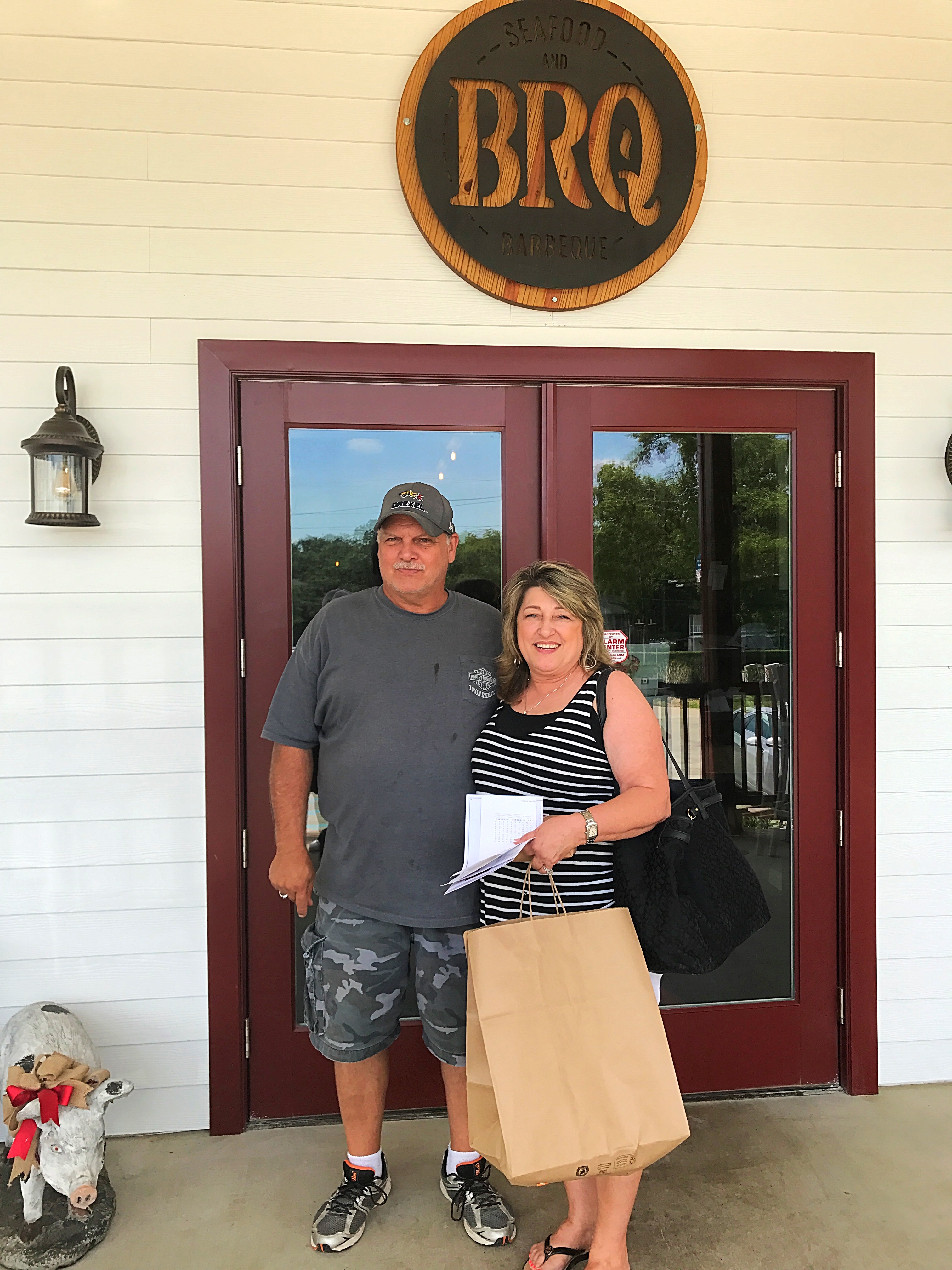 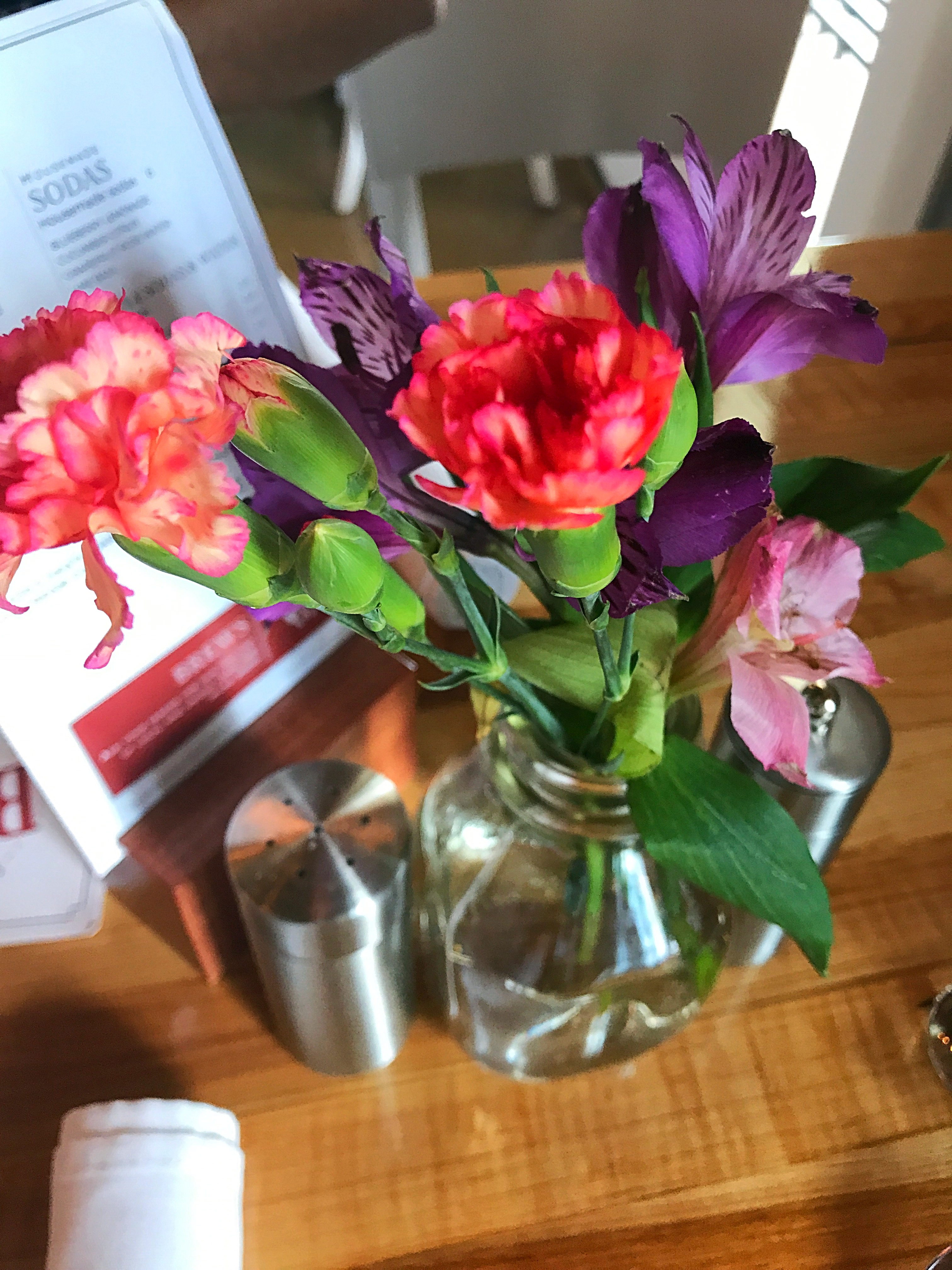 The hostess seated us right at 3, our seating was perfect near the window and a great view of the entire restaurant. 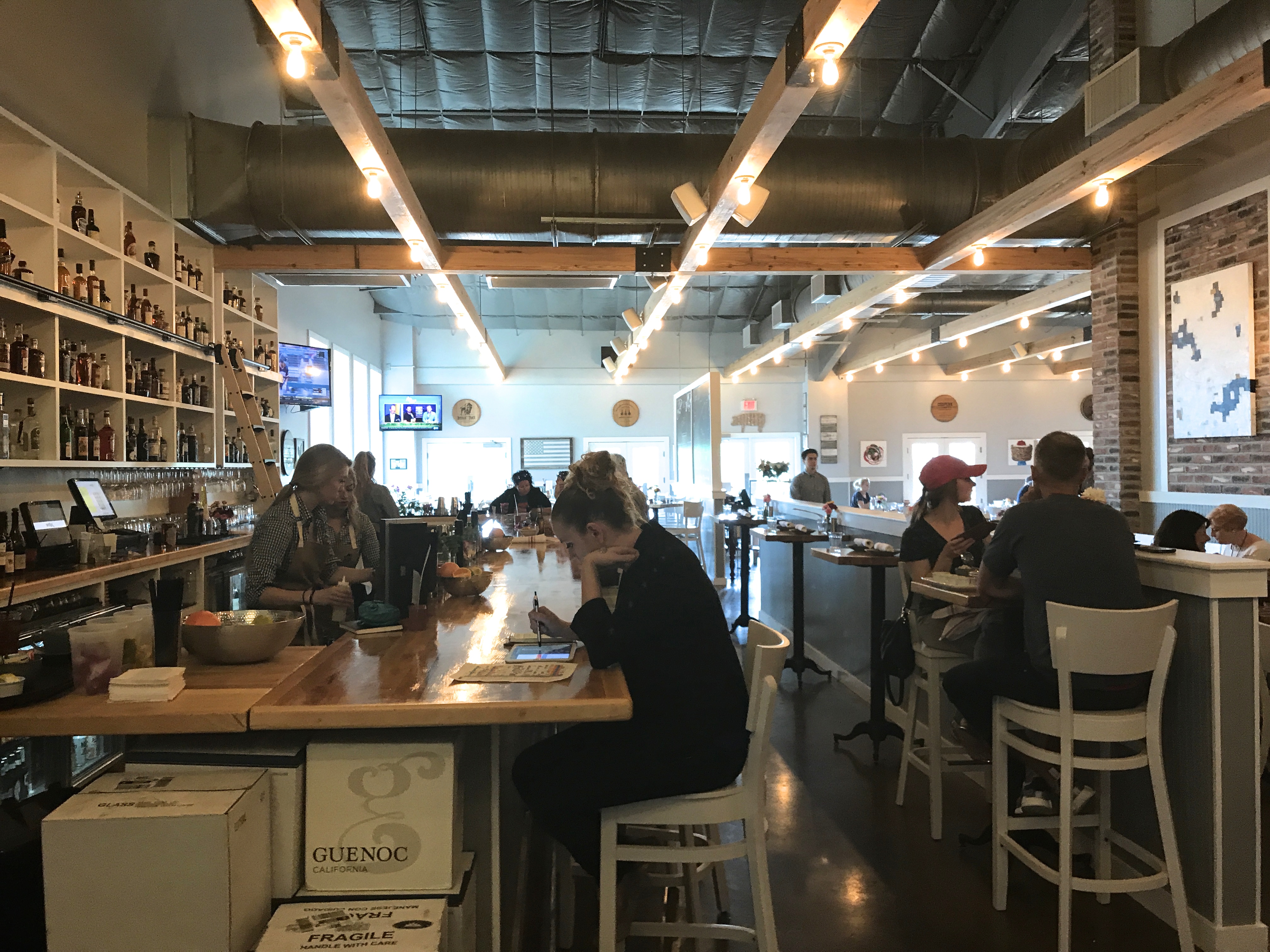 After we were seated, it took approximately 10 minutes for our waitress to arrive at the table to take our drink orders. She seemed irritated because she thought she was about to take a break but that wasn’t the case. We felt like we didn’t need to know that, she took our drink orders and proceeded to ask us about ordering appetizers.

I asked her for a few minutes and she left. She returned with the drinks and asked us if we were ready. At this point we were ready to order a few appetizers. 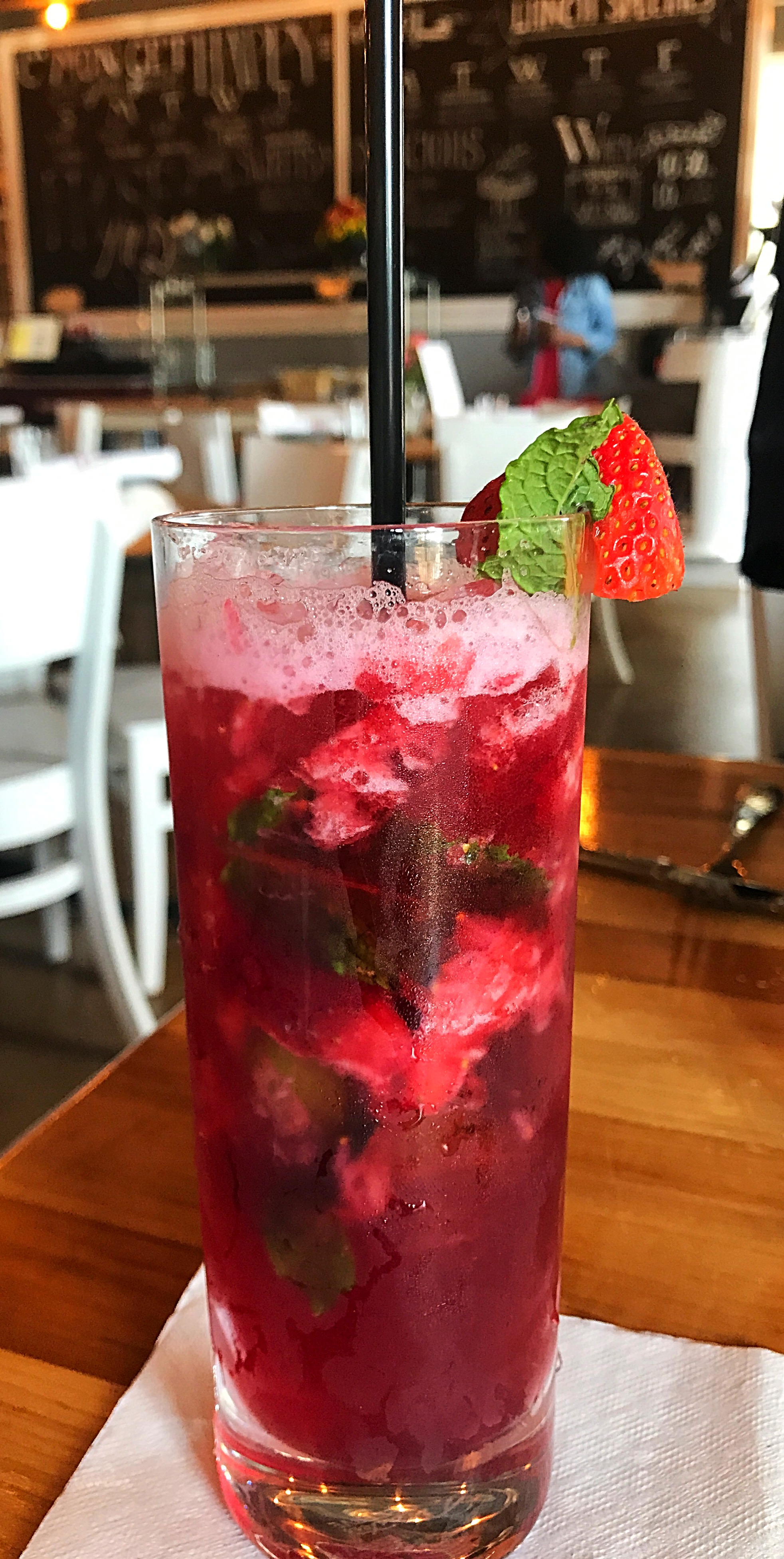 I ordered a fruity mocktail and the bartender whipped up a very delicious one. The  Strawberry Basil mocktail which was superb. 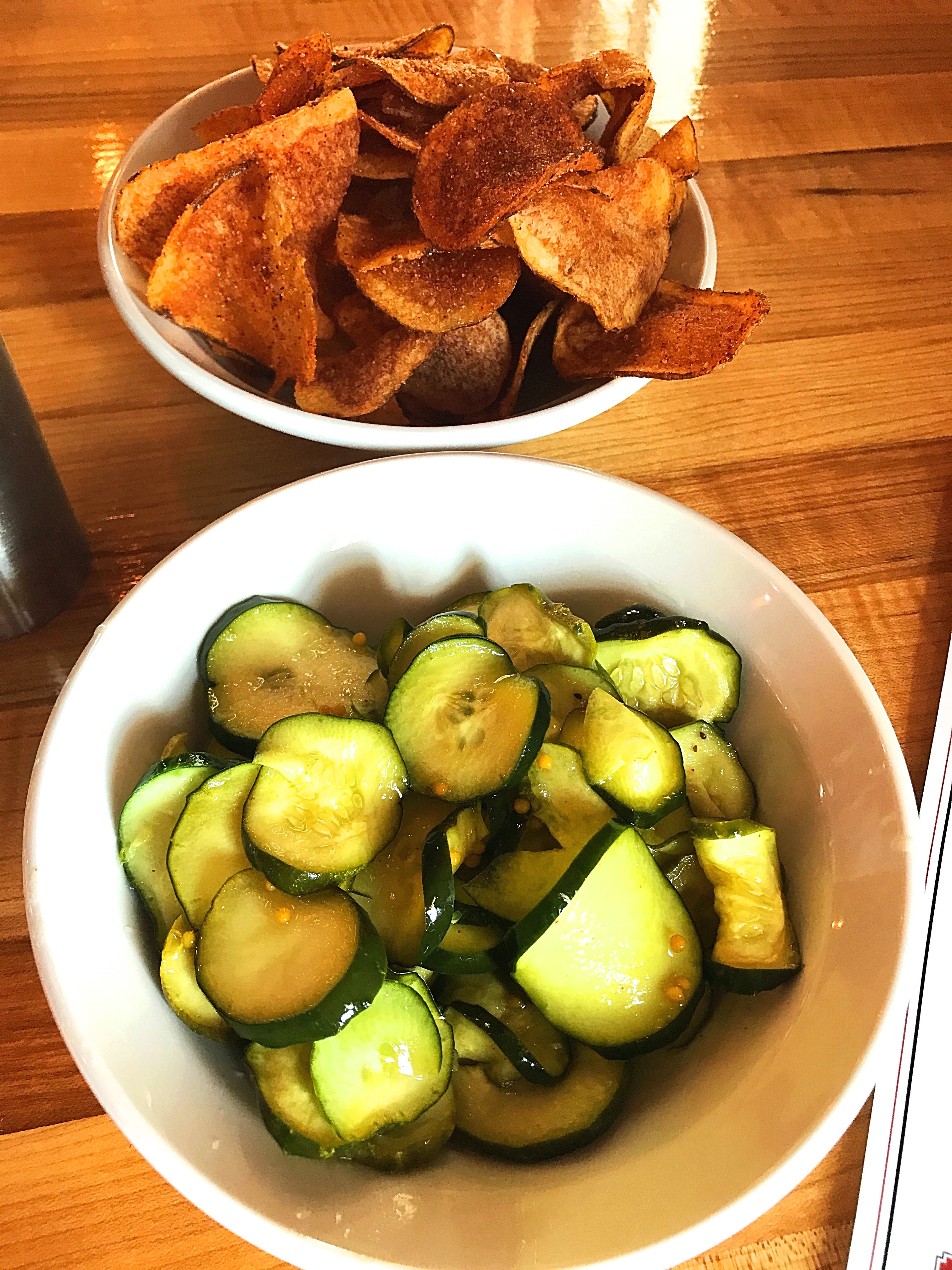 She returned with pickles and chips as well as water. The pickles and housemade chips are both tasty. We tried these at the Louisiana Culinary Institute.

The break confusion appeared to throw the waitress off her game, I guess. She was not a pleasant waitress at all. But luckily as our appetizers arrived we were given a new waitress.

The new waitress was well prepared, suggestive and very knowledgeable. Let me say this, I understand that BRQ is a new restaurant but this was the first week of opening, you should be energetic and excited about your job and this amazing restaurant. And that’s what didn’t happen with the first waitress. 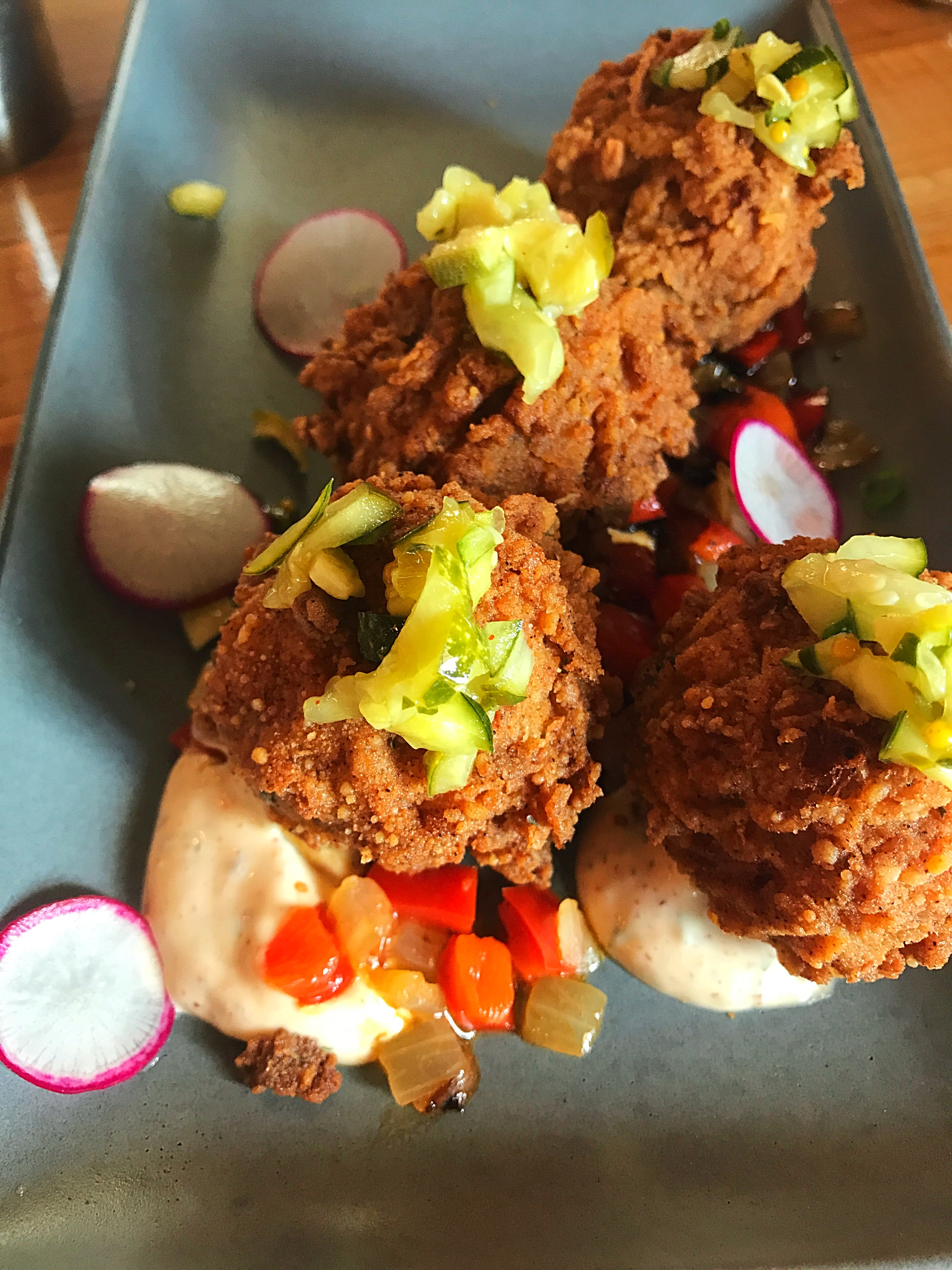 Now onto the delicious appetizers. Our first appetizer that arrived were the Boudin Balls. Fried boudin balls with aioli, caramelized peppers and onions, smoked chicken au jus. The dish was beautifully presented.

The flavors were on point. The boudin balls had a good balance of flavor. I loved the different textures in the starter. Really good. 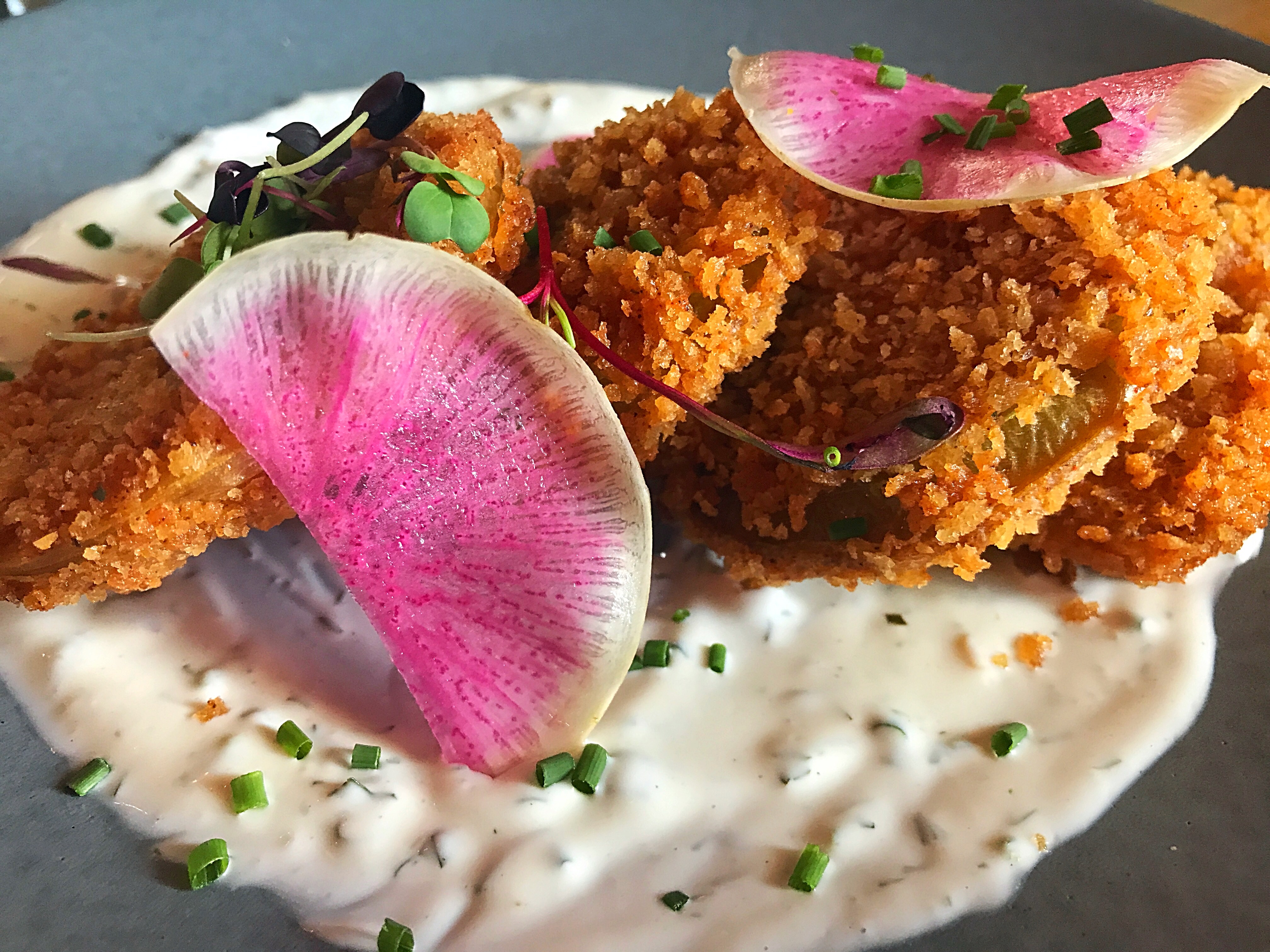 This dish was gorgeous. Simple but very eye popping with the touch of color!

These appetizers were a great start to our dinner.

We weren’t quite sure what we wanted to order for our entrees so the hubby & I kind of discussed possibilities. I decided on the Smoked Rabbit Pot Pie and the hubby ordered the Pitmaster.

I was so excited to try the Smoked Rabbit Pot Pie!  But guess what, they didn’t have any the day I went. What a disappointment. I didn’t have a second choice because I didn’t expect that their menu wouldn’t have what we wanted to order.

The hubby put his order in and I contemplated a little further. I really wanted the Fried Chicken but we had two appetizers that were fried, so I didn’t want to do that.

I decided to go with the Steak & Fries. 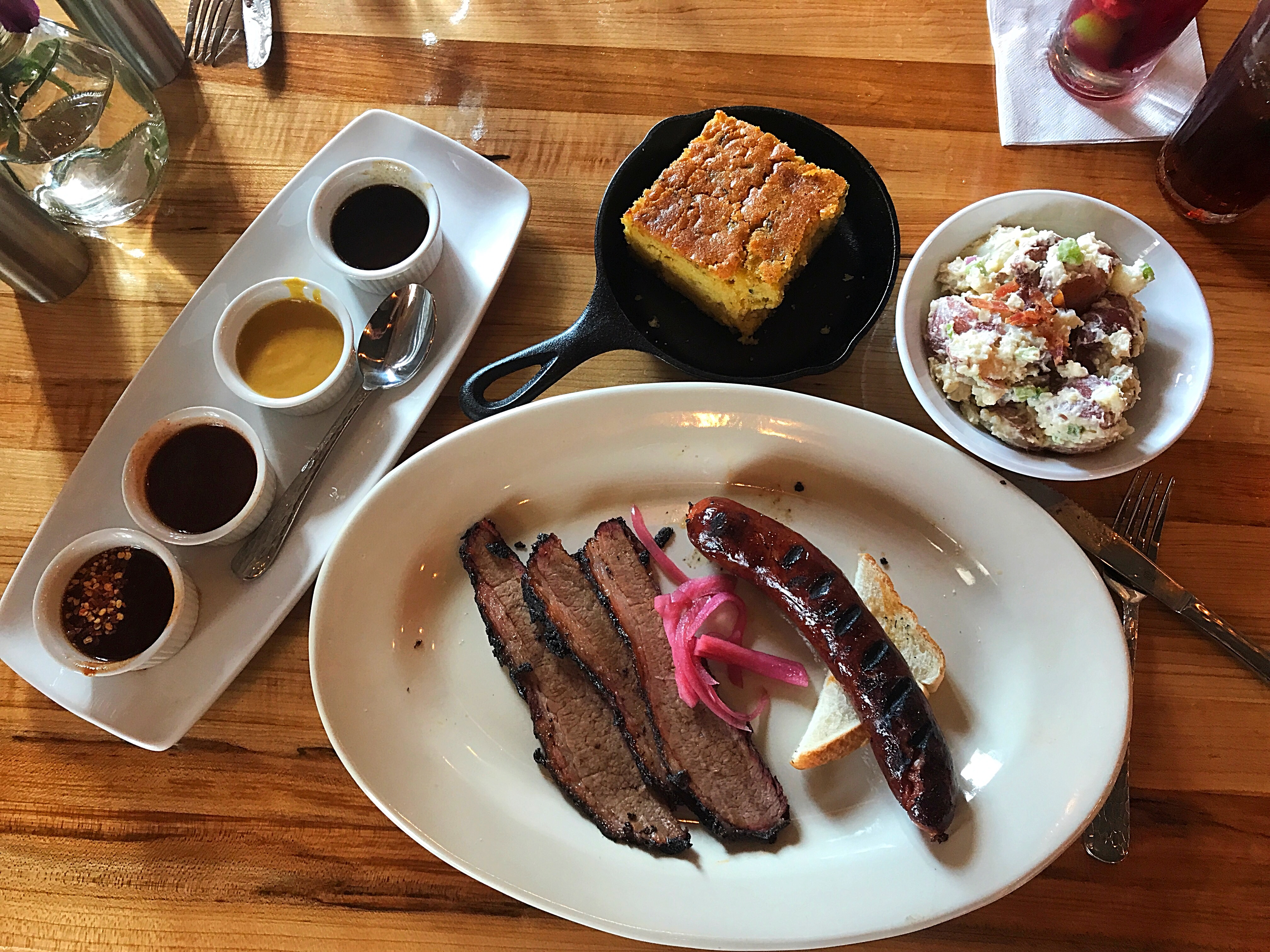 The hubby’s food arrived before mine so I ate a few bites of his food. He ordered the Pitmaster which included his choice of the 1/2 rack of Baby Back Ribs, Brisket and sausage. For his sides he chose the potato salad and the Poblano Cheddar Cornbread. 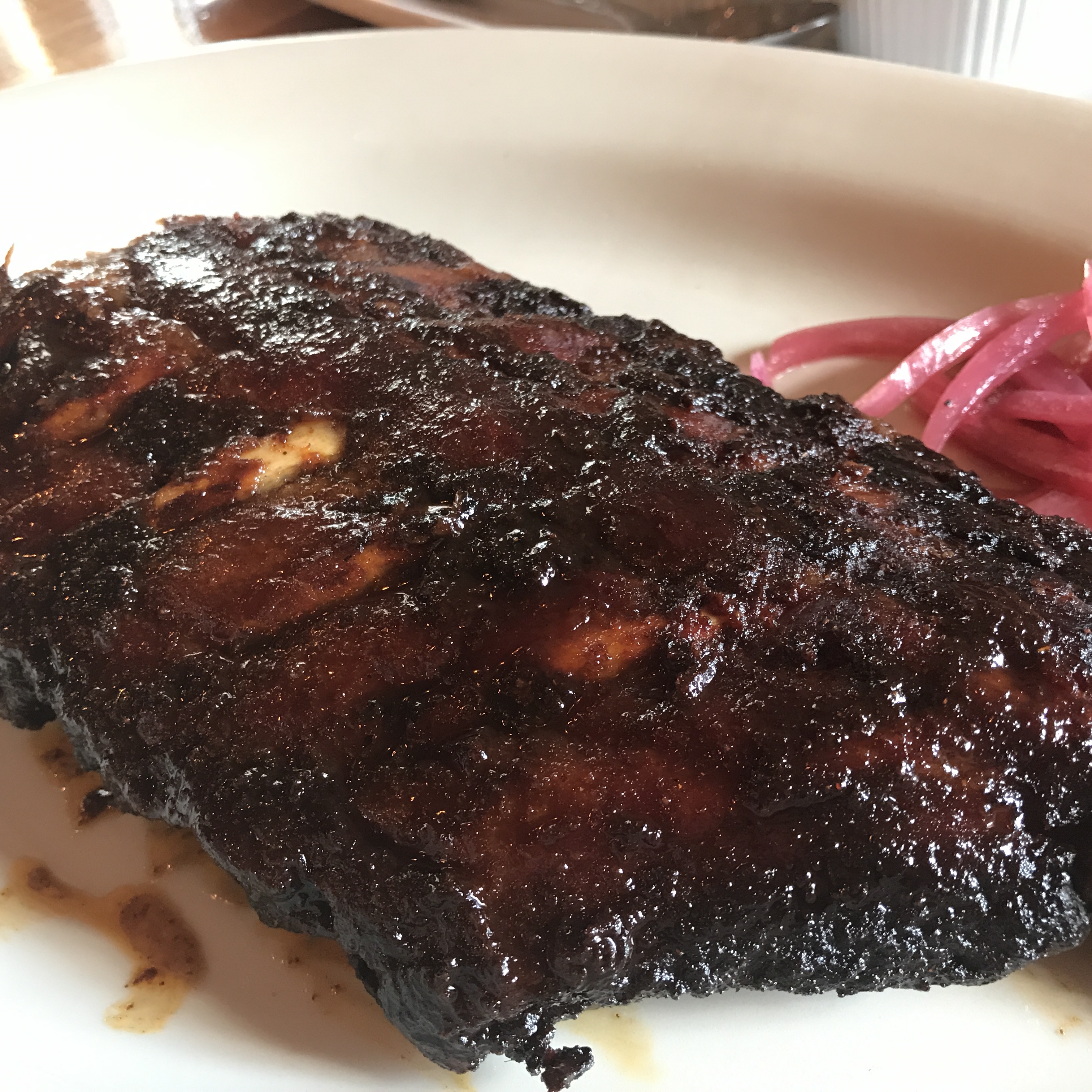 His food arrived but the Ribs weren’t on the plate with the other items. The waitress quickly rectified the issue.

The presentation of the meat plate was a little weird to us, seemed empty like the plate was missing something, which it was. I tried my best to style the food as best as I could to get a good picture.

The bbq was really good. The brisket was cooked nicely. The sausage was tasty paired nicely with many of the sauces provided. One of the things that I love about the BBQ is that with the Pitmaster you receive a sample of the different sauces. 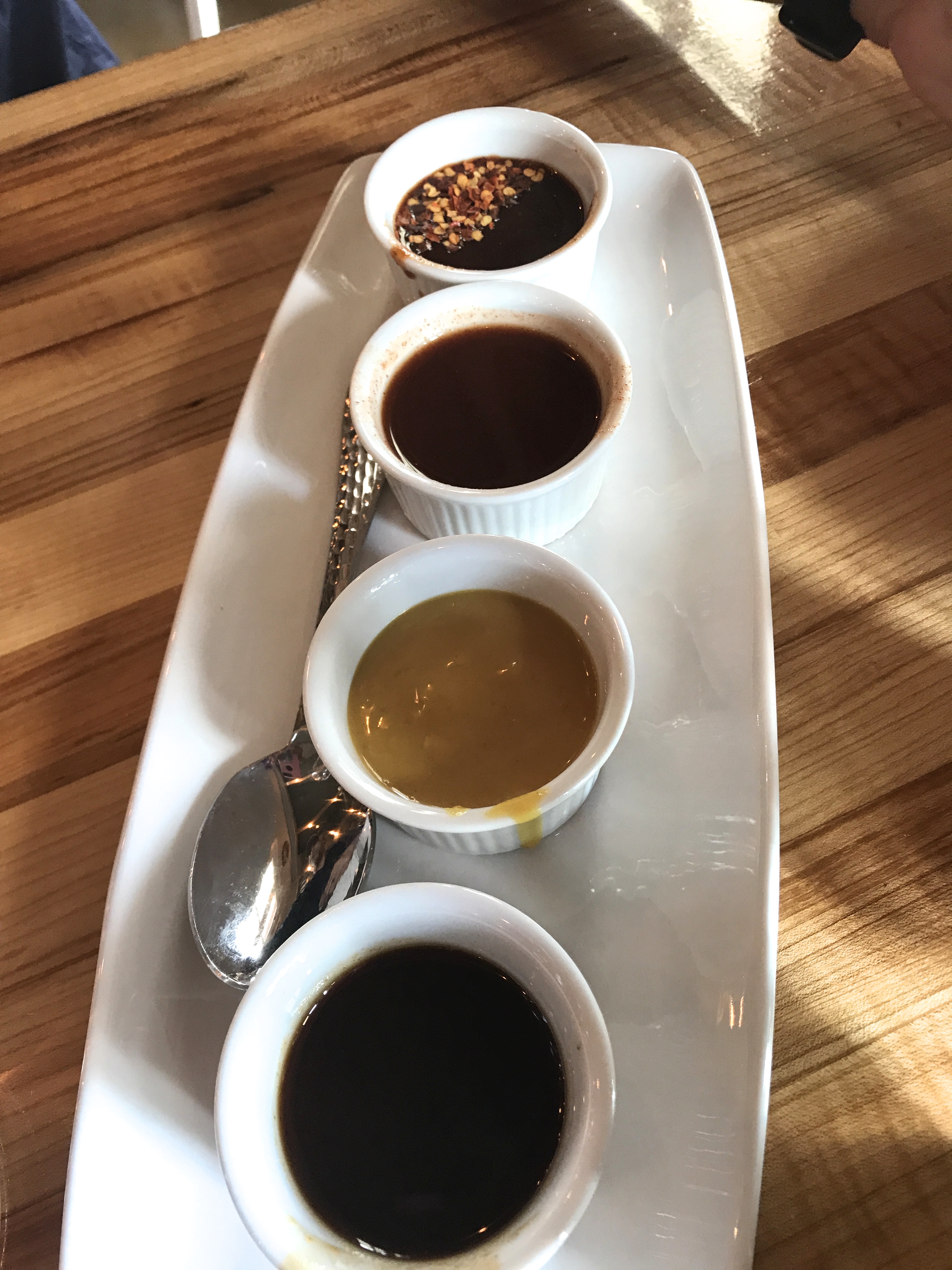 The sauces are all made in house. Love that! Original Mild, North Carolina Vinegar, Louisiana Spicy and South Carolina mustard.  All of the sauces were delicious and a nice presentation as well.

The Poblano Cheddar Cornbread was out of this world!  We couldn’t stop eating it. I loved that it was served in a mini cast iron skillet.

The potato salad was good as well. Made with red potatoes. A good side option. 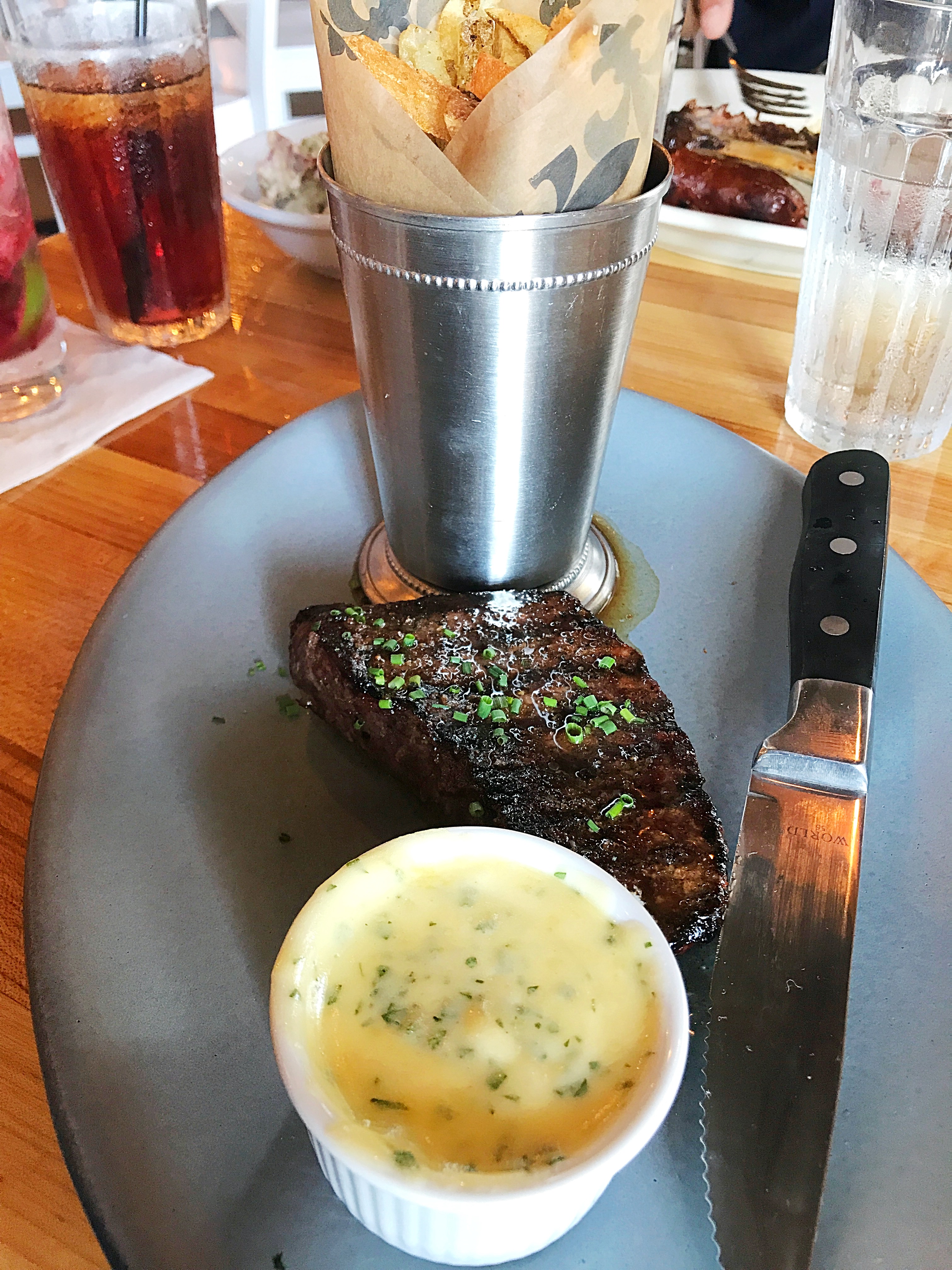 My food arrived at the table. I think presentation wise, the dish was missing an element that would wow you. The appetizers were all so beautifully presented so we were hoping for the same colorful accents with the entrees but that wasn’t the case. 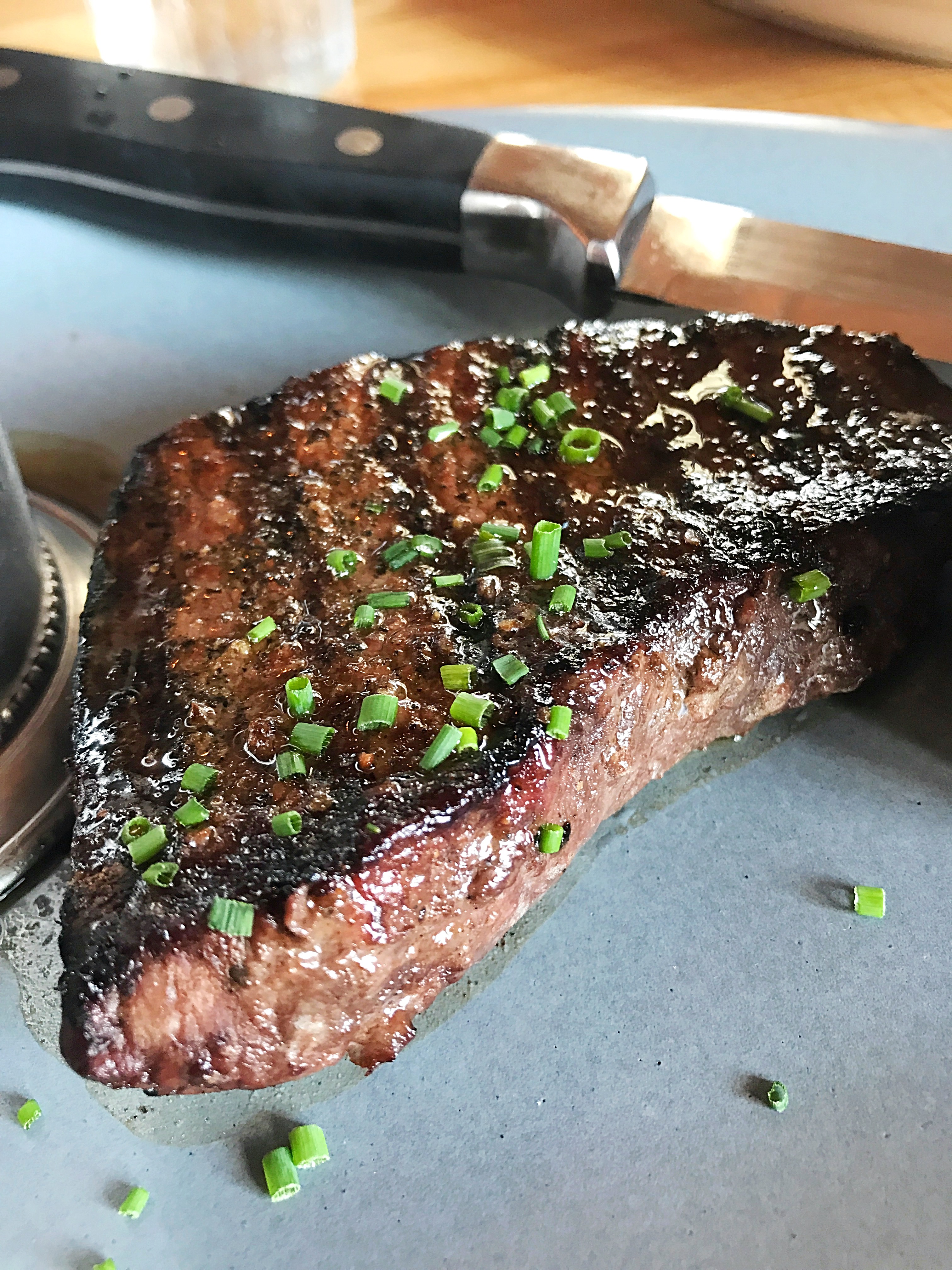 The steak was good. I probably should have ordered the steak medium, because the steak was dry. It was seasoned well. The fries were good. The bearnaise was a good choice to go with the steak. I just wished it would have been juicy. 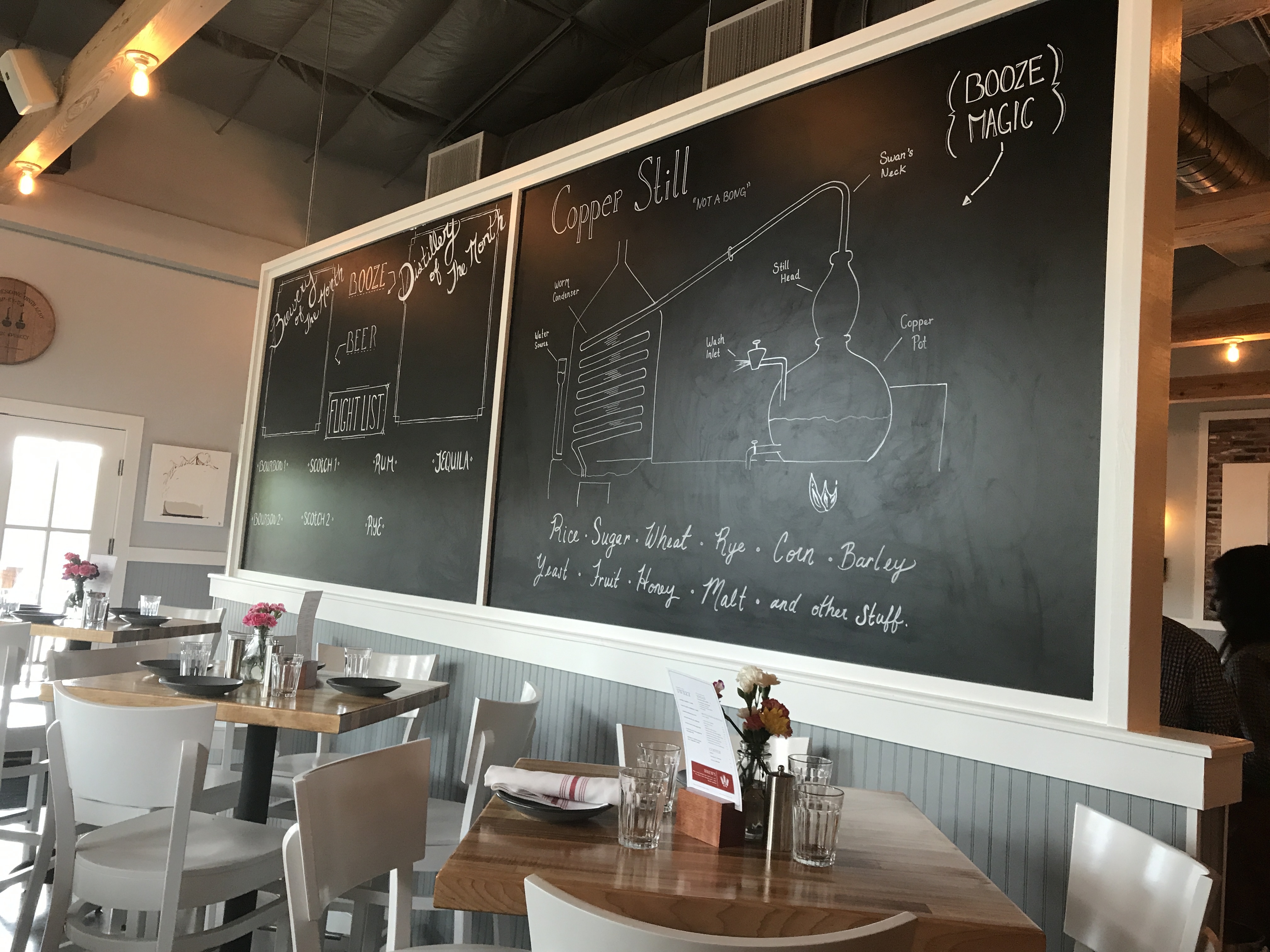 After finishing our entrees, the waitress asked us if we wanted to try dessert! Uh yeah! She laughed and told us that the desserts are superb. She gave us a minute to decided on a dessert.

We wanted the Lemon Meringue Pie but they were out of that dessert. All the ones we chose were out. All they had left was the chocolate options. The hubby and I aren’t big on chocolate so we decided not to do dessert.

There were cookies and rice krispie treats that were homemade but that’s not our thing. 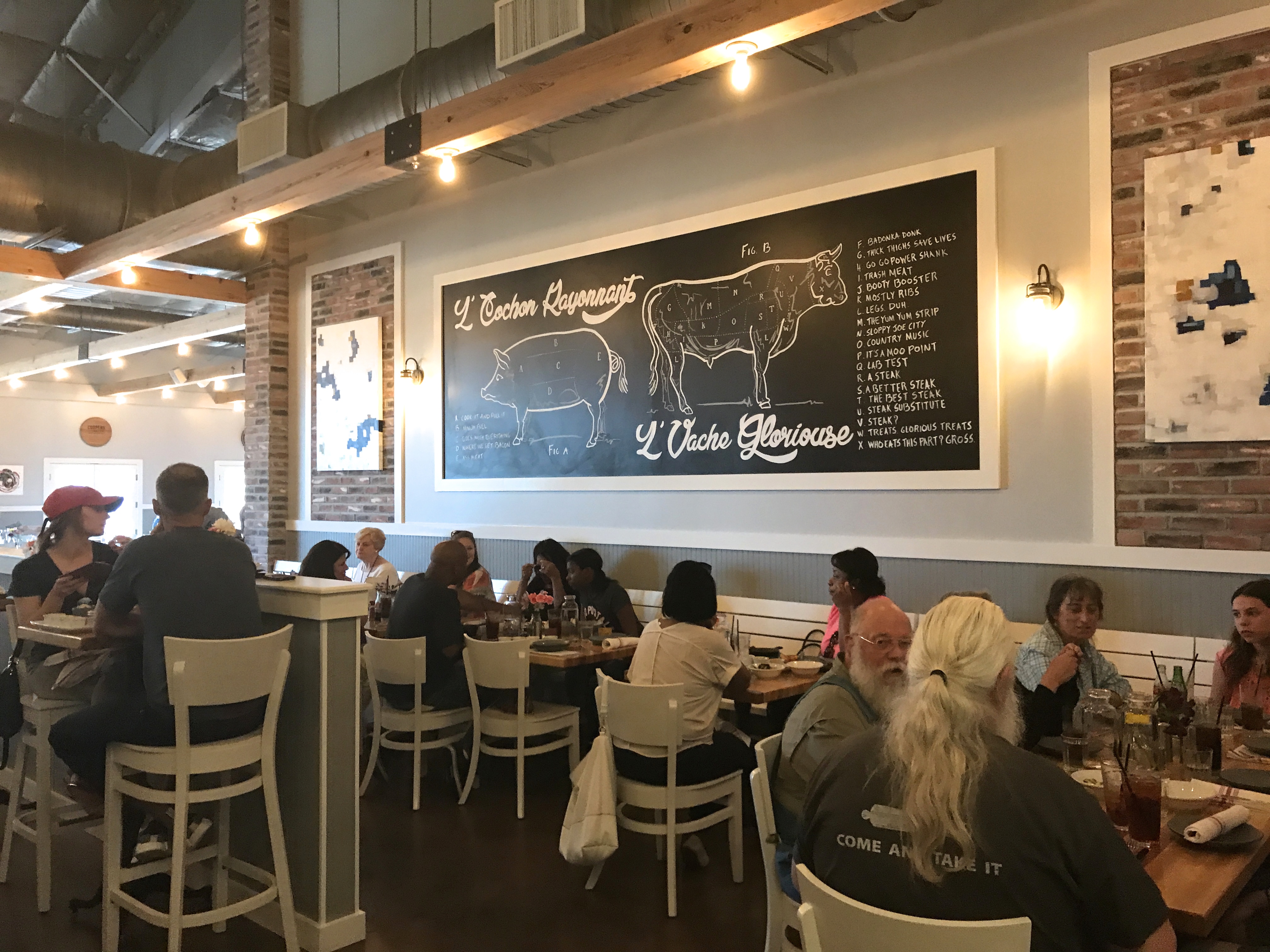 Overall our dining experience at BRQ Seafood and BBQ had some wins and hits, but there were also some misses. I do understand that it was week one of the restaurant opening so they are learning.

But as a blogger, I go when my schedule allows. I usually wait a few weeks, but I knew that I wouldn’t be able to make it there till July if I waited.

The starters were all incredibly delicious. The BBQ was superb! We will definitely will be back for more BBQ. 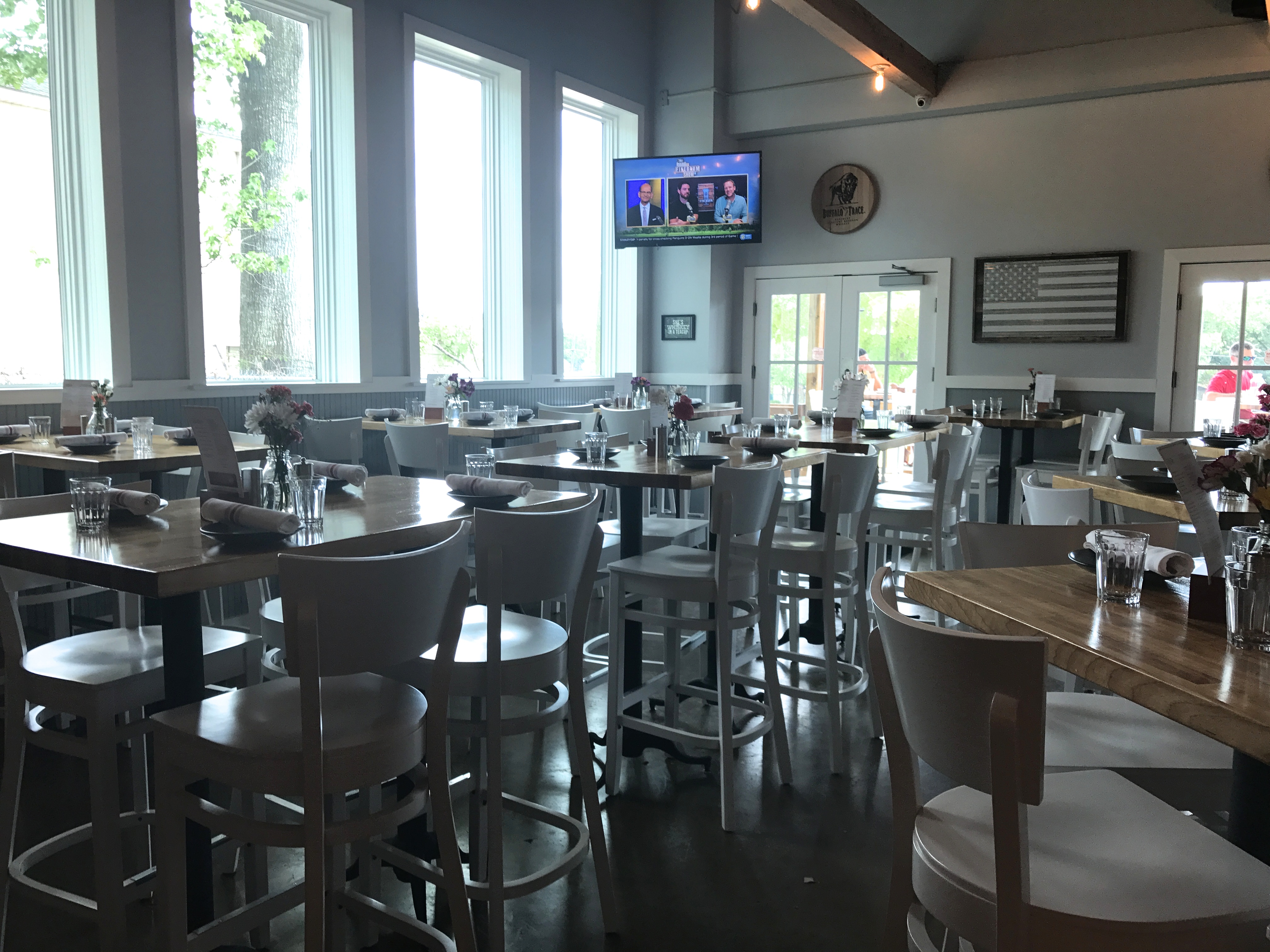 The look of the restaurant was really nice! A very clean look. The staff overall was nice. The first waitress could definitely use more training, but the second waitress was on point!  She did a great job!

The front of the house was walking around the restaurant, he came near us but never came to our table. Had he come to the table, I would have addressed my concerns then and kept the complaints out of the blog but he didn’t.

I am hoping that these minor issues can be fixed, because I want to see BRQ succeed. We were beyond excited to try the restaurant but we left a little bit underwhelmed at some of the items we had.  I know that with time the Chef/Partner, Justin Ferguson will see to it that these things are ironed out.

We will definitely give the restaurant a try again. But it is my job as a food blogger to be honest with my readers and followers about my experiences whether it is a paid event or if I paid myself. 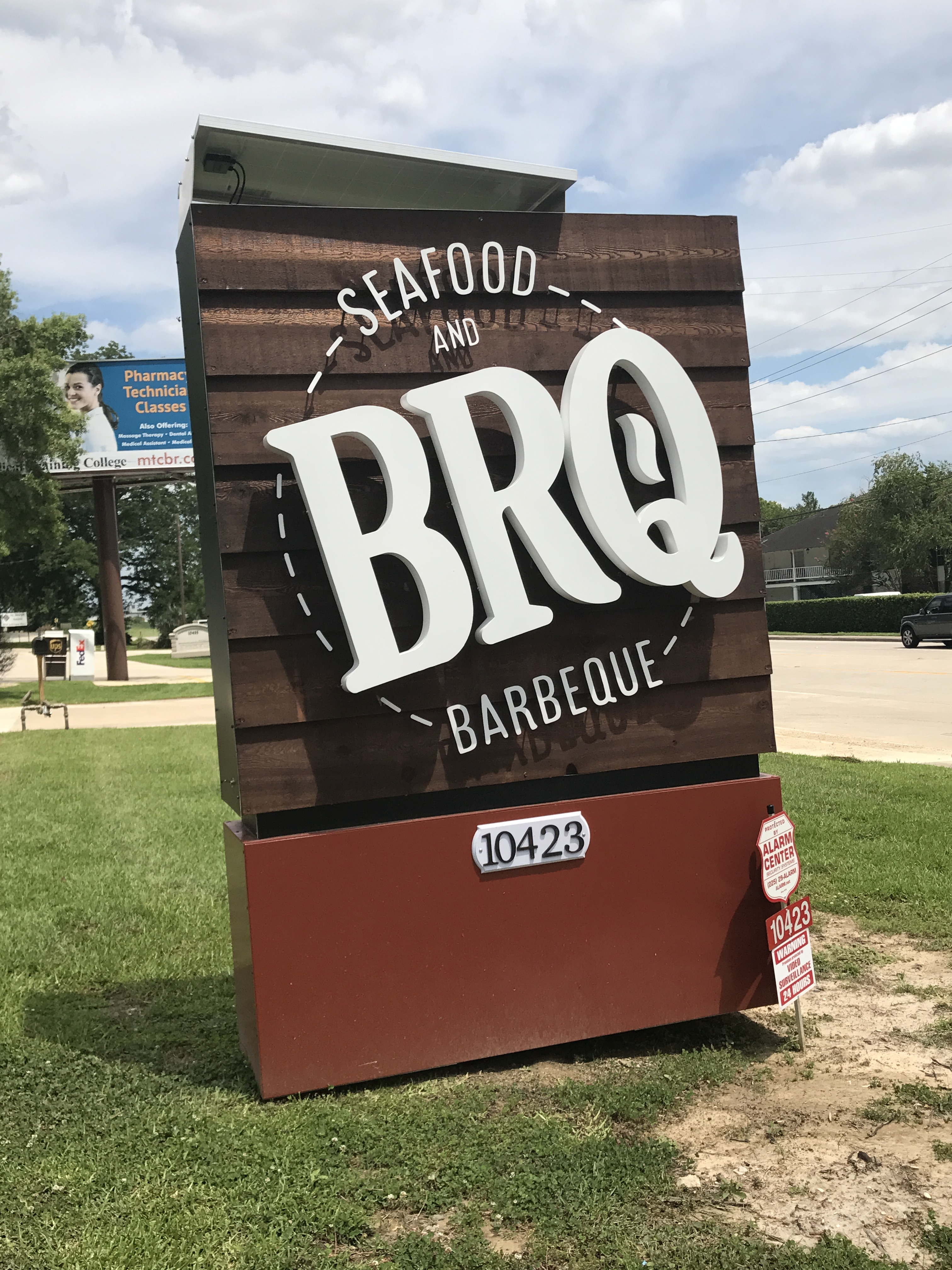 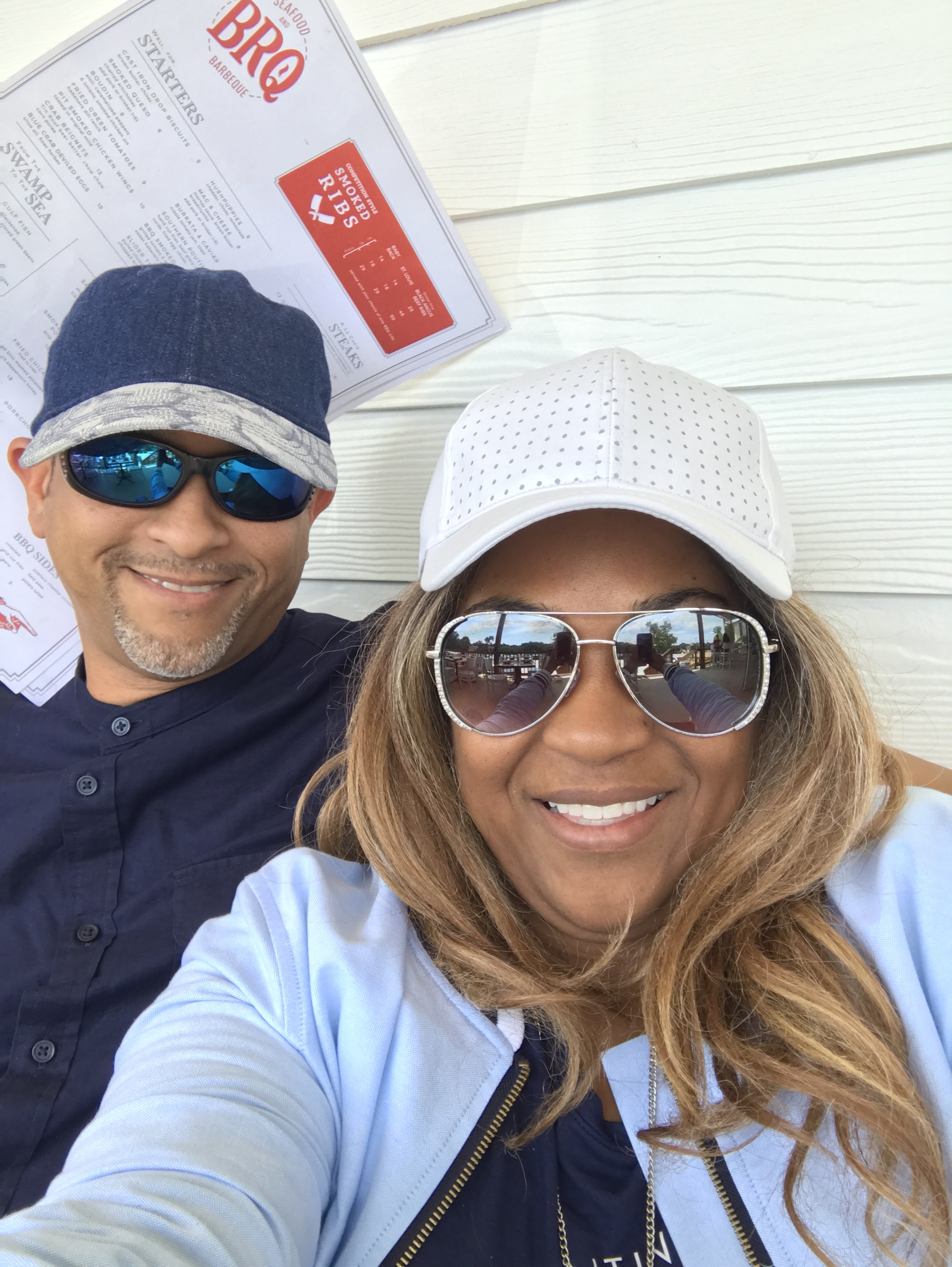 Go and try BRQ and be sure to tell them that Da’ Stylish Foodie sent you!

It’s a BRAND NEW week! Start the week off right

If you’ve been following me for any length of ti

Watching movies is something that me and my crew l

Keepin’ it light with my Crab Club Salad. This

I’m so ready for Crawfish season. Being from Lou

Happy MLK Day! “Everybody can be great...becau

#ad We recently built an outdoor patio and kitche

My friend & I stopped in for breakfast at CoCo Cre

Before moving to Texas, I had never heard of or ea

Coffee and Devotionals are how I start my mornings

Red beans and rice on this cold Monday! This is bo

Last games of the NFL Regular season this week! Ca

A few weeks ago, My family and I visited State Far

Stuffed Bell Peppers are not something I cook ofte

The kiddos are officially back in school. The hubb

As my kiddos get older they are getting more inter

It’s the First Sunday of the year. My family and

#NYE is here again. I think many of us are approac