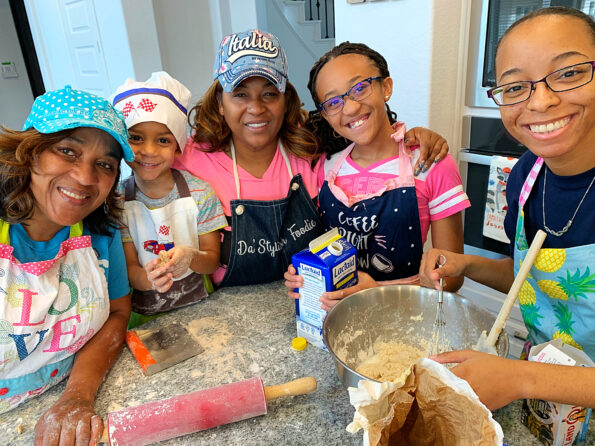 My mom is famously known for her Cinnamon Rolls. She makes these Cinnamon Rolls for our family and it has been a hit for as long as I can remember.

So she taught the kiddos the easier version. 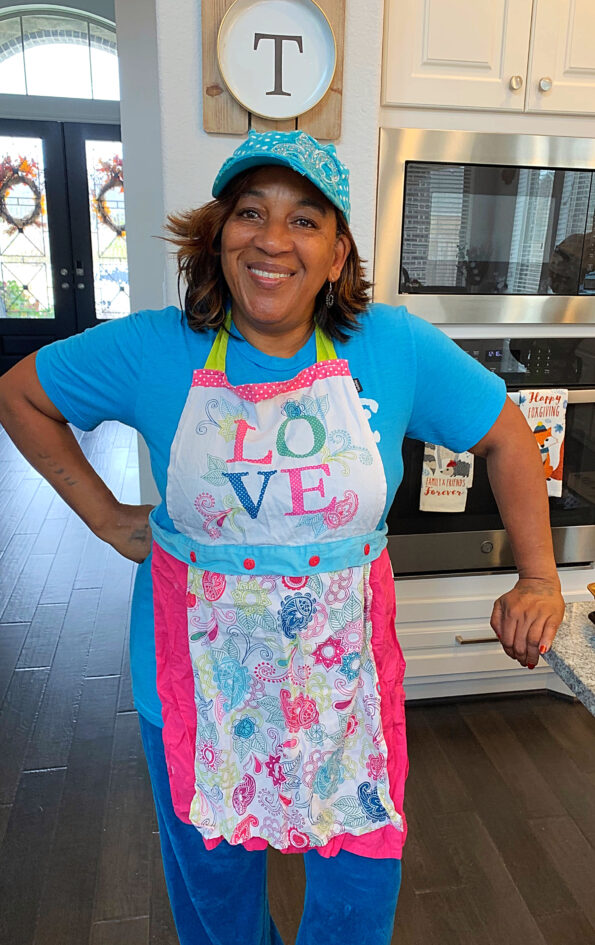 We started with gathering Aprons. 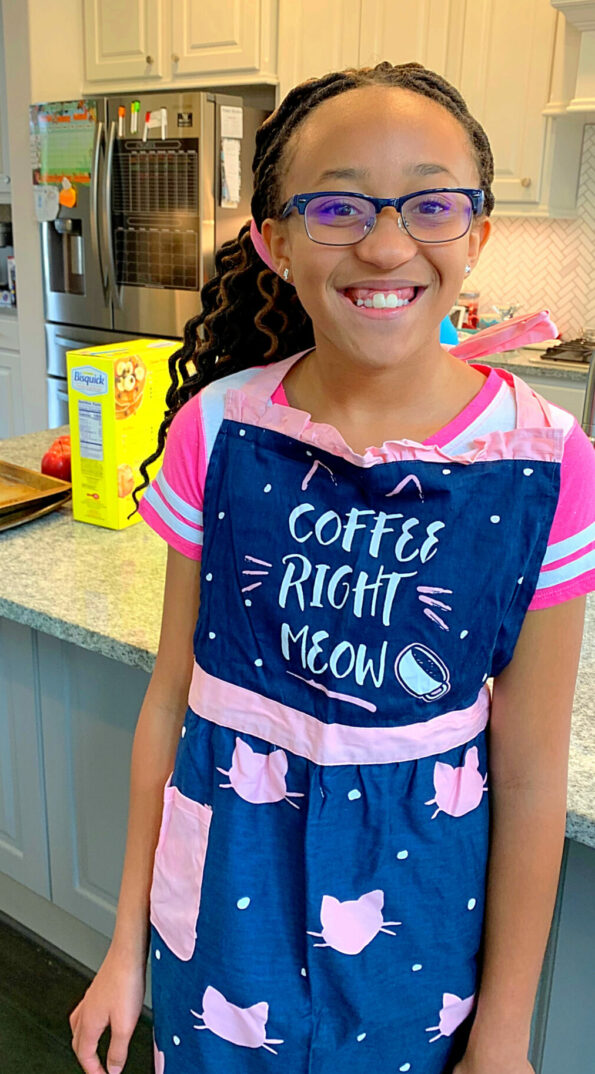 The kiddos got their aprons on and were ready to go. 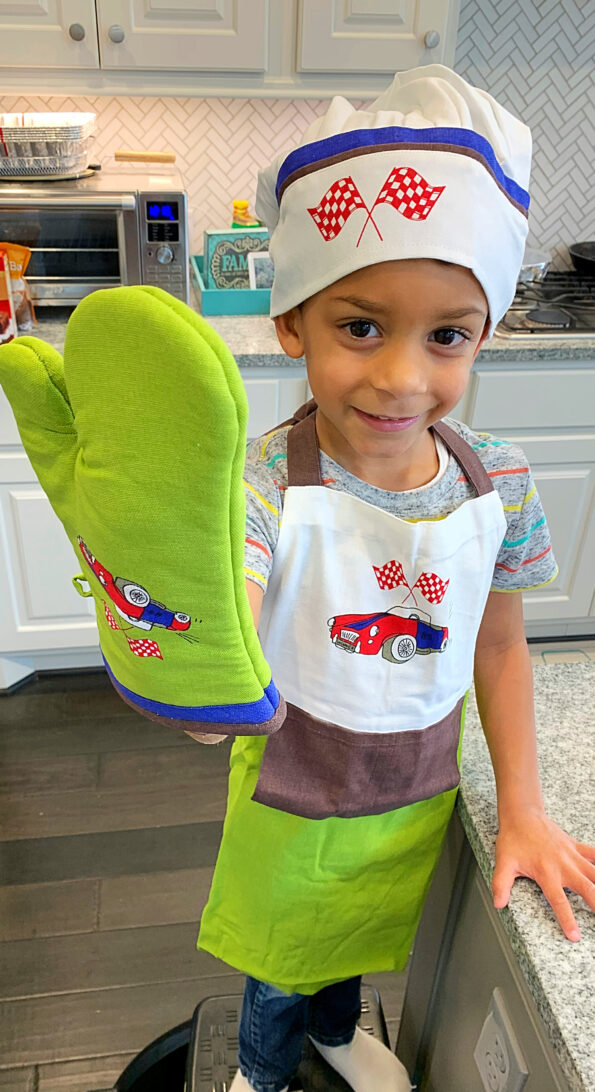 My son was fully decked out. He was ready for the task at hand. 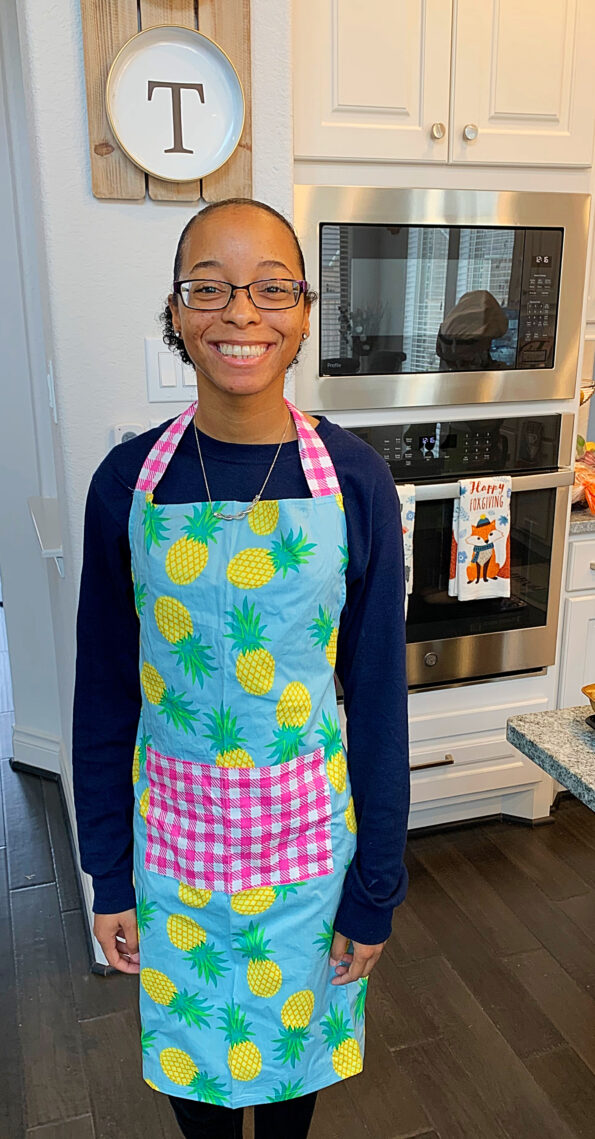 My stepdaughter is older but she is such a good sport and loves to cook too. So it was fun for her to learn something new. 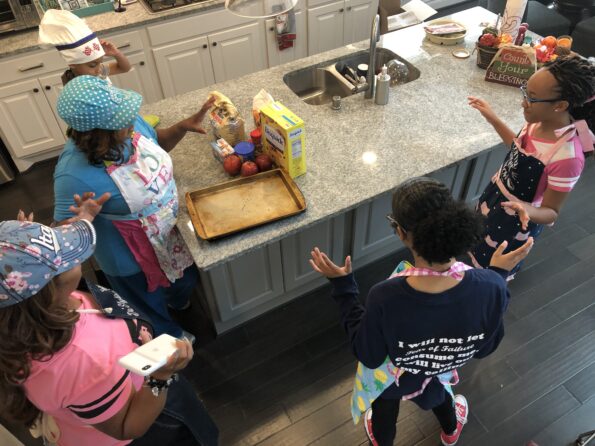 Mom is a very religious woman and she begins everything with prayers. She prayed with and for the kiddos and started explaining the steps to them. 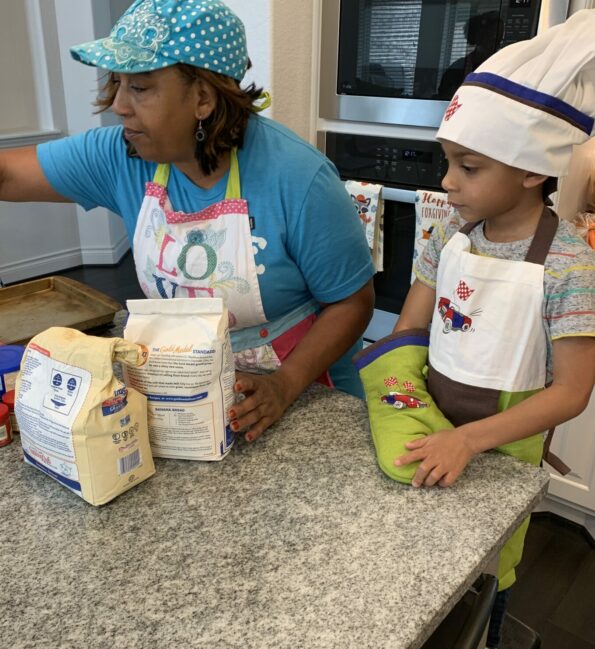 They talked it over and began the process. 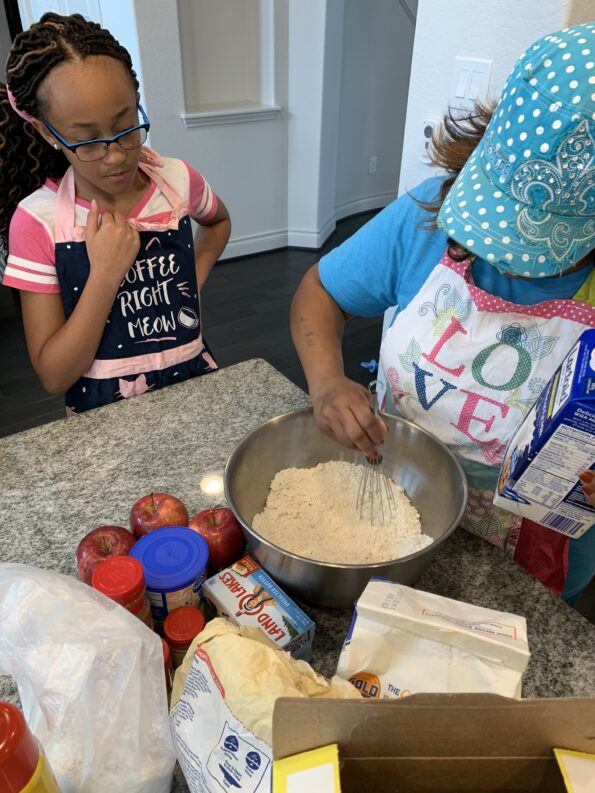 The first batch mom walked them through it. 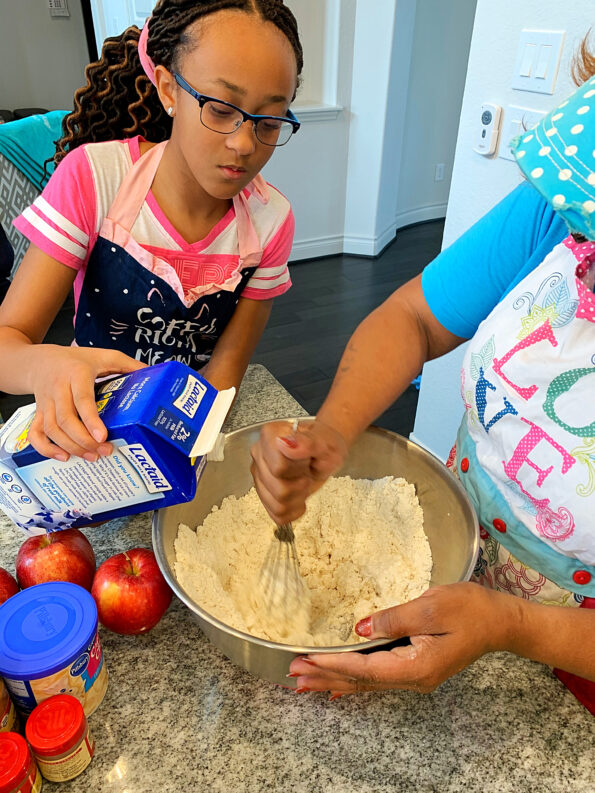 While they also assisted her on certain steps. 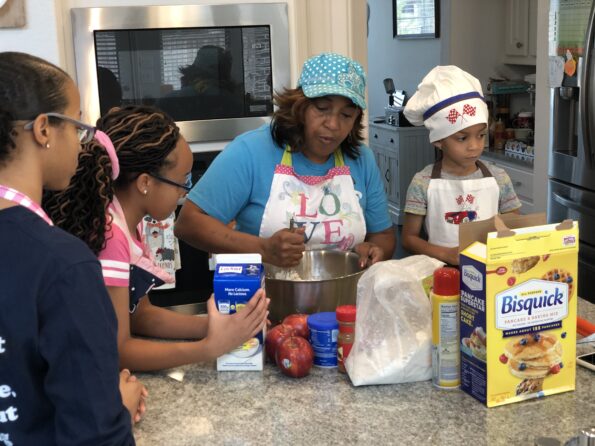 Once everything was mixed…. 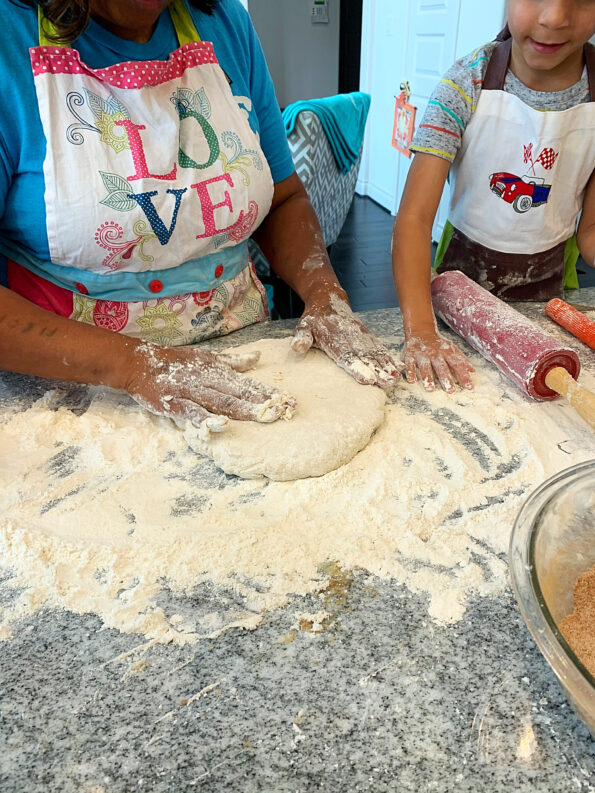 It was time to roll out the dough. 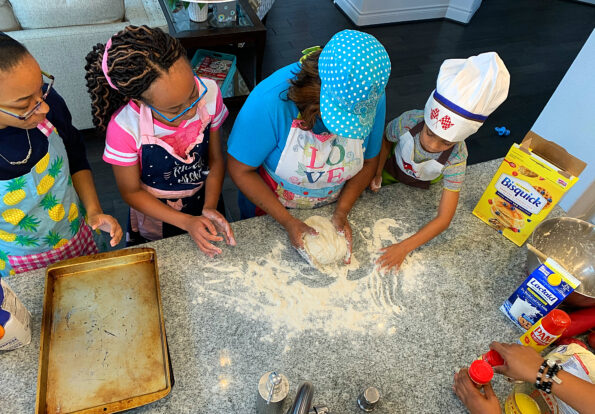 They floured the counter and started the process. 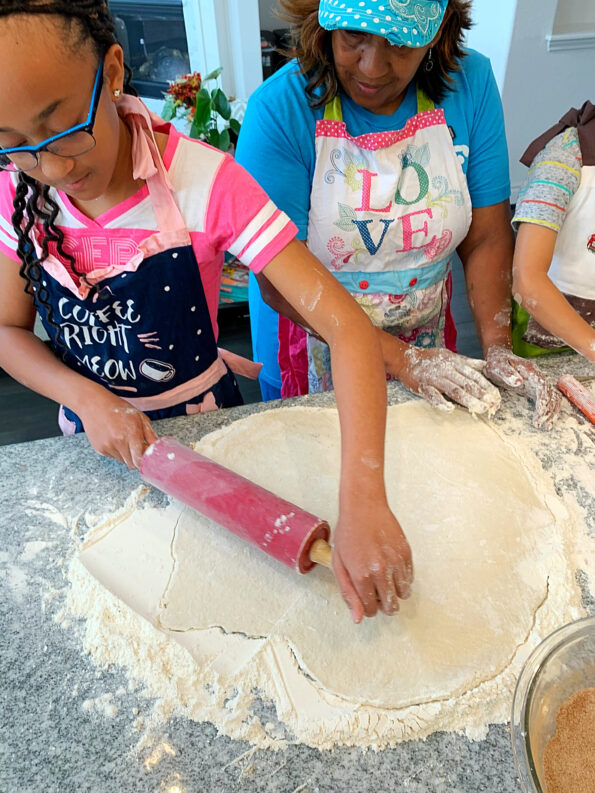 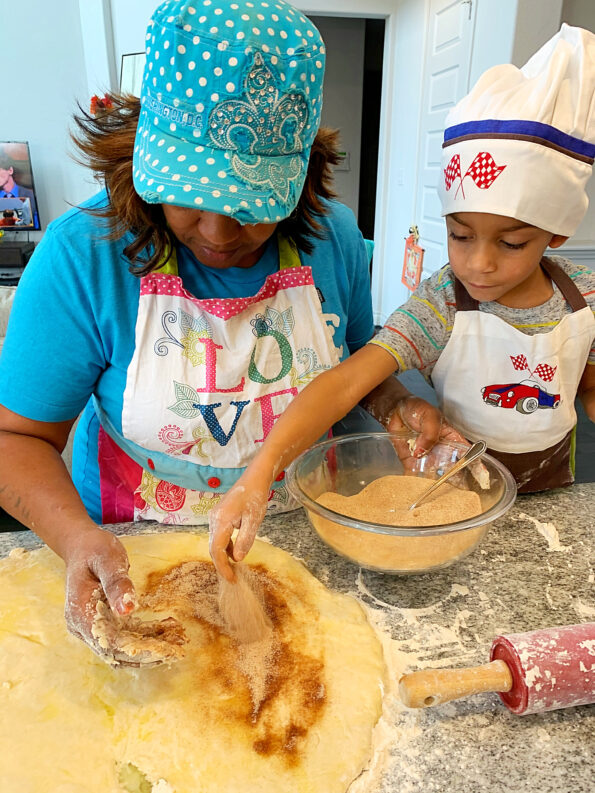 Then butter and her mix for her cinnamon rolls. Top secret. 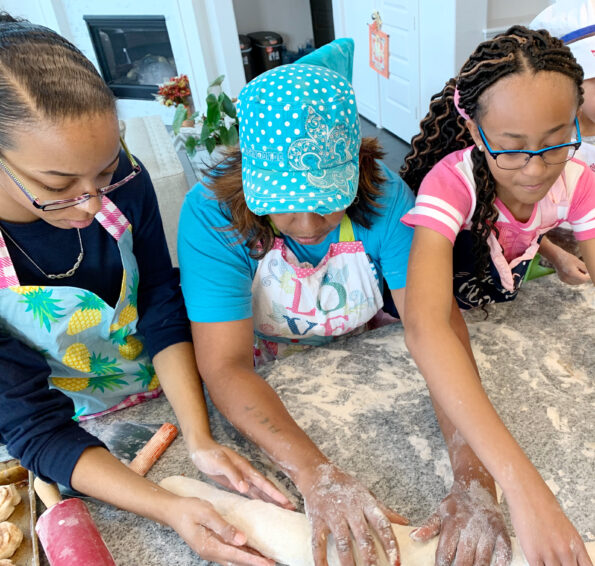 Expect your hands to get a little dirty. 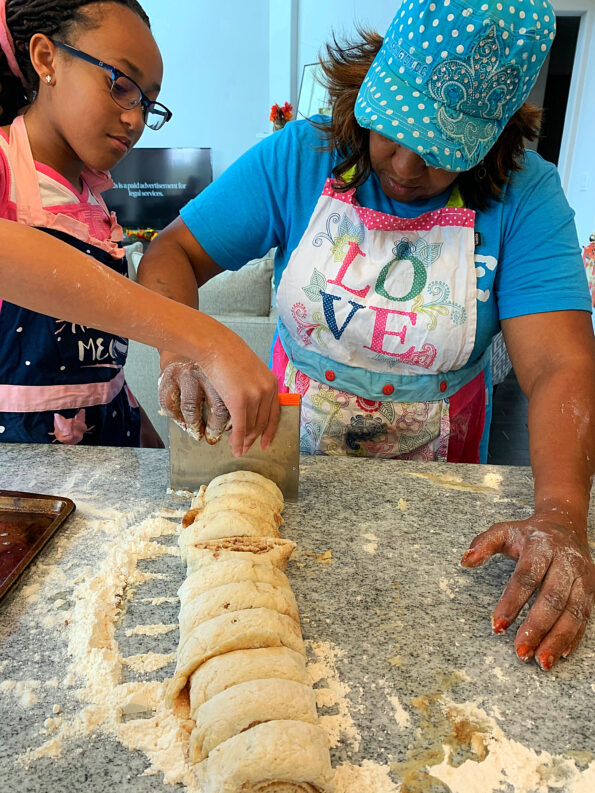 Once the dough was rolled. It was time to cut the cinnamon rolls.

They were then buttered and set aside. They finished the first batch. 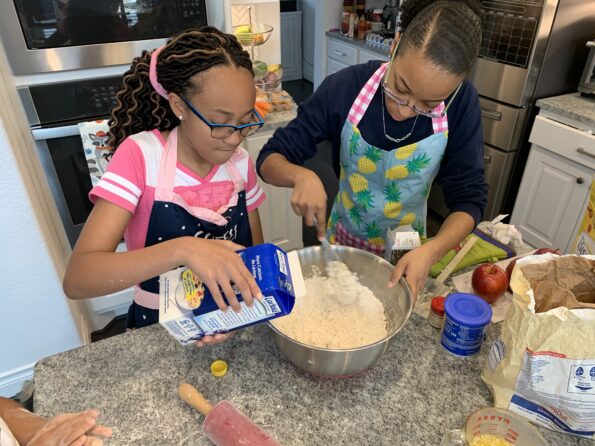 Then it was time for independent baking. 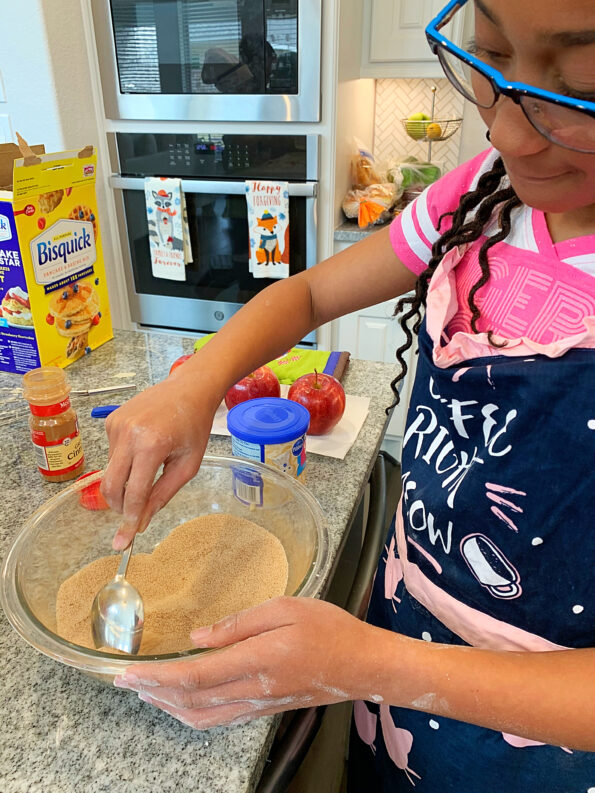 My mom watched as they did it alone. 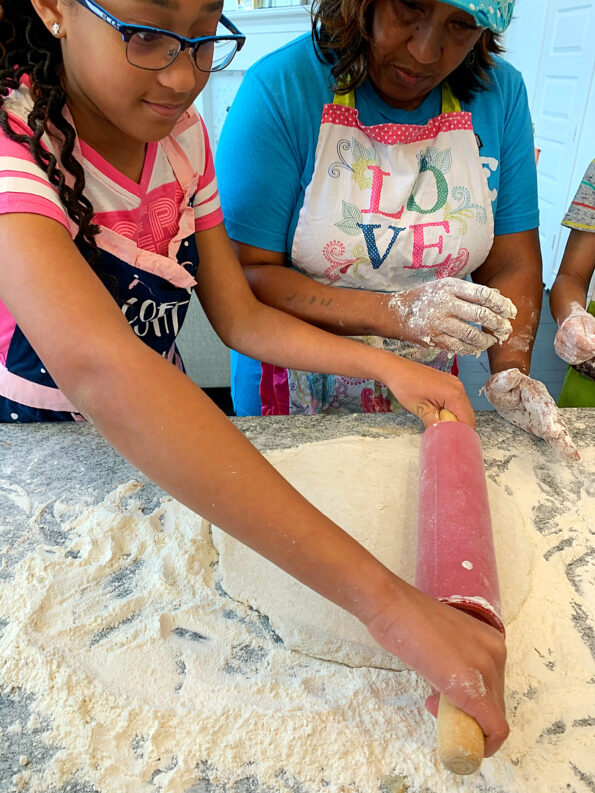 She was there to guide but they did all of the work on their own. 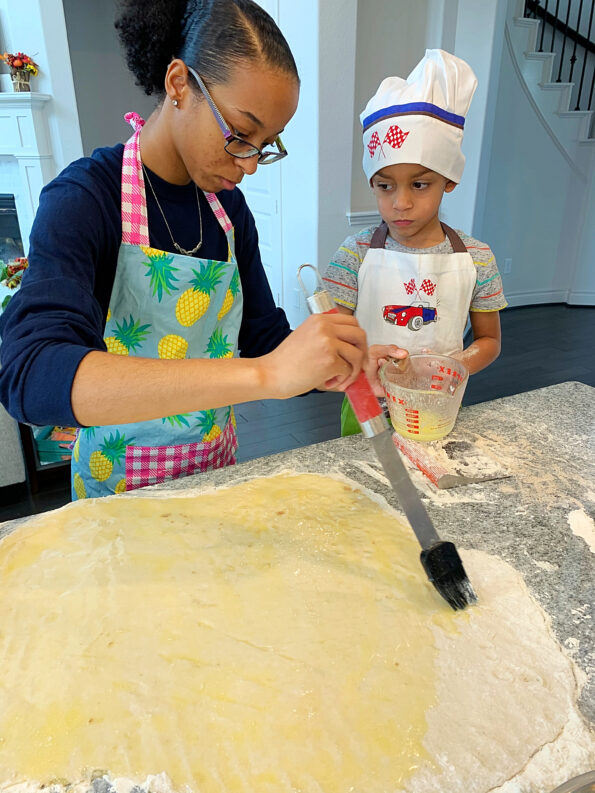 The kiddos worked together to get the task done. I even jumped in here and there to help out. 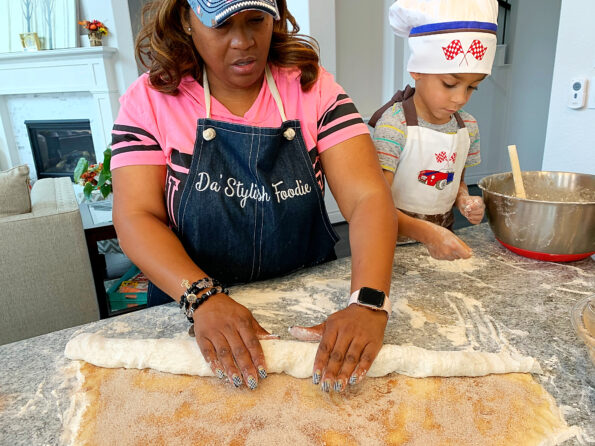 They did really well. It was a joy to see them work together and share this experience with my mom. 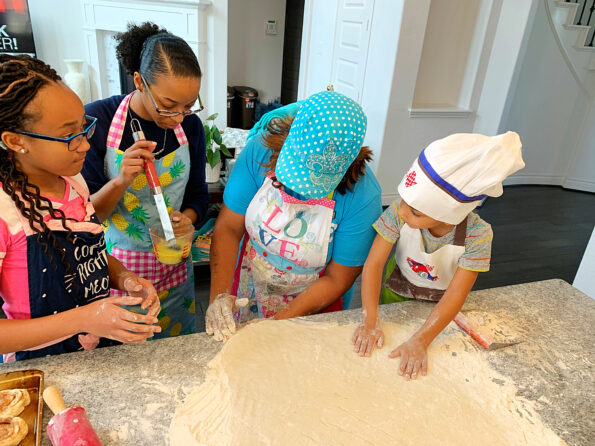 Being able to pass on this experience is priceless. Time spent together during this Holiday is key. Because you never know what can happen.

So please enjoy time with your family. Take pictures and make memories. 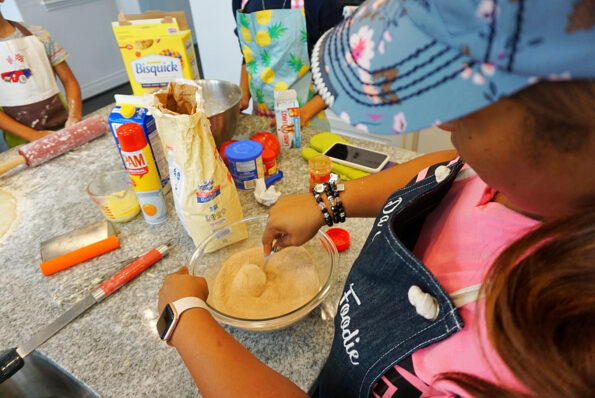 Back to the recipe. The recipe only needed a few simple ingredients. 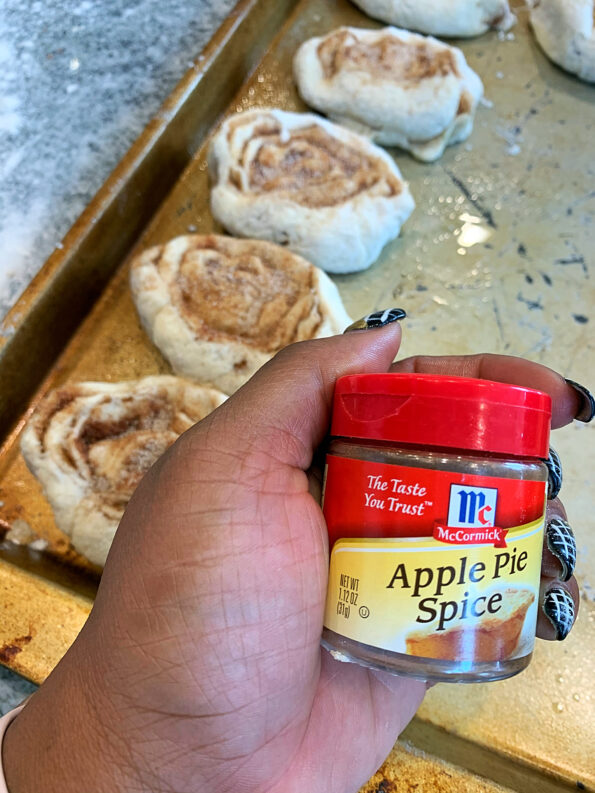 I did add my two cents to her recipe with a twist.

They let the cinnamon rolls rise a little before baking.

After baking and cooling a little, we iced the cinnamon rolls. 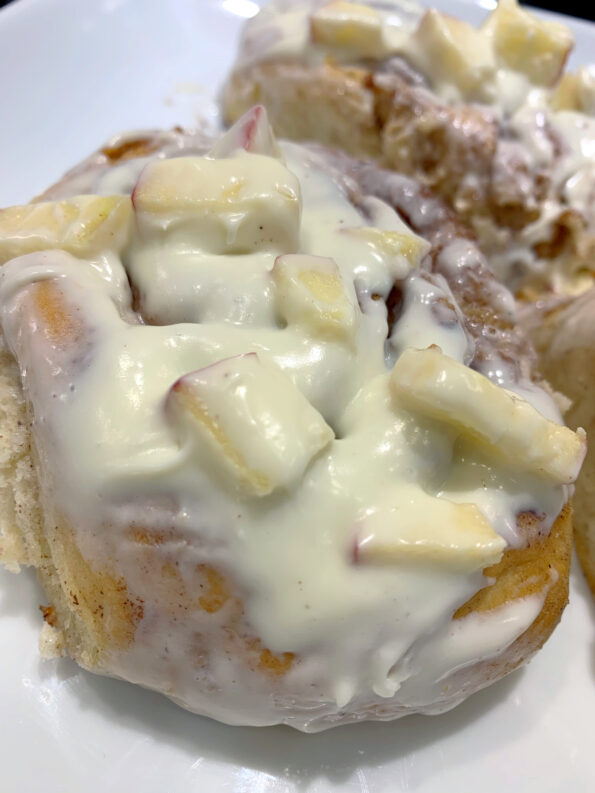 So I present to you, our Apple Pie Cinnamon Rolls. Delicious.

What an amazing afternoon that they shared together. I am so thankful for this experience. 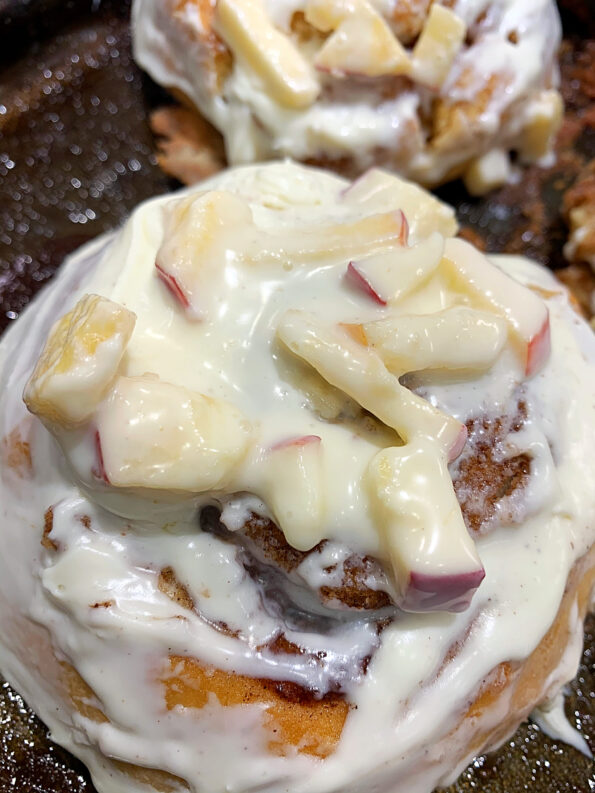 I won’t be sharing the recipe in this blog, but maybe in the future. 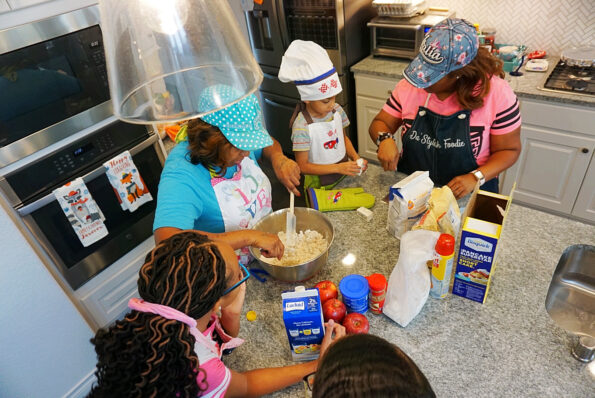 The crazy thing is my mom is a really good baker, but baking is not something I like which is weird. But maybe that will all change. 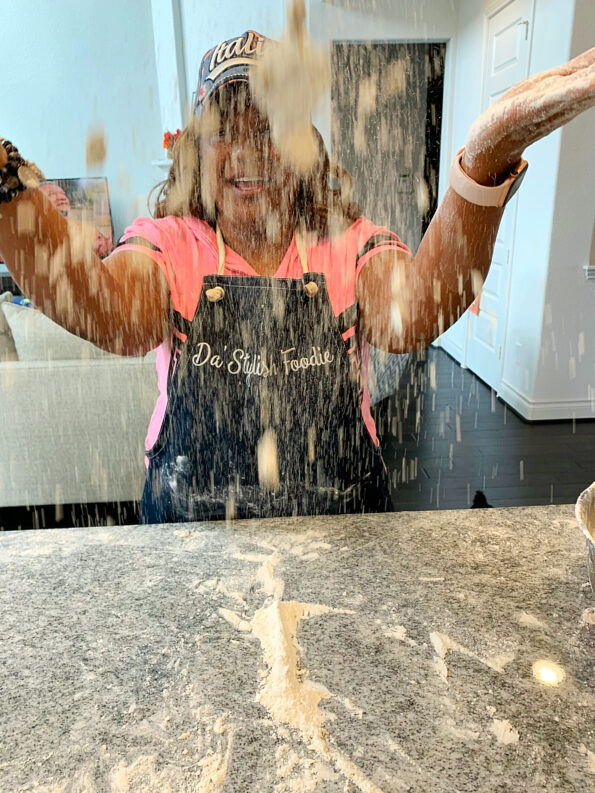 That’s a wrap! Happy Holidays! Enjoy your family during this Holiday Season.

One thought on “Family Time, Passing Down Recipes”